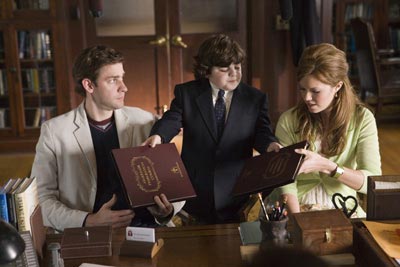 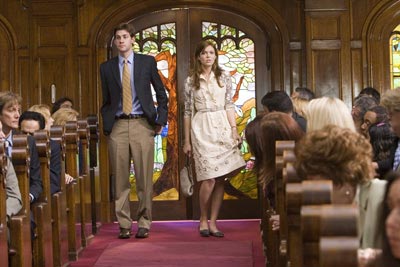 She has a new single, an album is soon to follow and her acting is not doing too badly either. There is always more to the charmingly beautiful Mandy Moore than meets the eye, as Paul Fischer discovered when he chatted 1:1 to the singer/actress about acting, romantic comedies and music.

At 23, Mandy Moore is somewhat of a veteran. As a singer, Mandy Moore was a teen favourite, but acting has rapidly followed as a successful successor to her singing career. And if recent films are anything to go by, the actress has discovered the romantic comedienne within, from her previous Because I Said So to her newest film, License to Wed. But Mandy Moore says that she's willing to hang up that particular mantle for the time being. "I think I may have to retire the romantic comedy for a little bit," Mandy Moore concedes as we chat at the end of a day of interviews. "I had fun doing it, but unless there's something just completely mind blowing for the next one I do, I think I'll have to look for something else to entertain me for the time being."

License to Wed revolves around newly engaged Ben Murphy and his fiancée, Sadie Jones [Mandy Moore], who plan to live happily ever after. The problem is that Sadie's family church, St. Augustine's, is run by Reverend Frank, [Robin Williams] who won't bless Ben and Sadie's union until they pass his patented, "foolproof" marriage-prep course. Consisting of outrageous classes, outlandish homework assignments and some outright invasion of privacy, Reverend Frank's rigorous curriculum puts Ben and Sadie's relationship to the test. 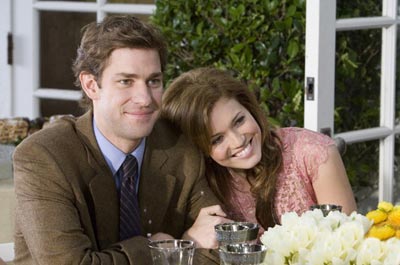 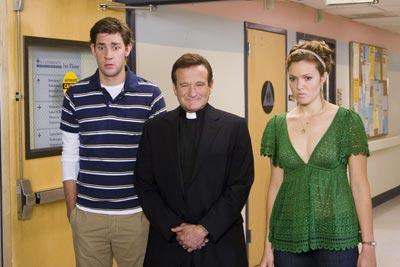 While Mandy Moore's character in this is more together than the hapless girl she played in Because I Said So, the actress said it was not so much the character that appealed to her this time around, but rather "the appeal of being able to work with Robin Williams and John Krasinski. It was also great to be able to do a movie where I get the guy in the end. I just loved the story, because it was so sweet and really had a lot of heart." Mandy Moore laughs when asked if she could identify with the film's theme of commitment. "I don't think I've every been in a relationship that's come far enough to even be thinking about those sorts of things so I didn't completely relate to it, but the romantic, simple side of me inside of my brain, really went there and had a lot of fun imaging what it would be like." Mandy Moore says that marriage is not something she currently seriously contemplates. "Not at all. I'm only 23 years old so I have a ways away 'til I start thinking about that stuff."

It is Mandy Moore's diverse career that keeps her going these days, including the Indie film Dedication which premiered to rave reviews at this year's Sundance Film Festival, in which she plays a children's book illustrator opposite Billy Crudup. Moore says that she is searching for these kinds of more interesting character parts. "I had fun doing a little bit of the back and forth, doing something that's a little bit darker and a little bit more of a challenge and then taking on a role that's maybe a little bit more like who I am in my real life. It's fun and it's a good experience to go back and forth between doing an indie and a studio movie as well. So I think I just want to find roles that really speak to me, that are a challenge in some way."

But it's her music that continues to redefine the singer/actress, with her latest album Wild Hope, released following the single Extraordinary. Mandy Moore says that this latest album truly defines who she is at this point in her life. "This record is very defining and reflective, also of just kind of where I am and what's sort of happened in my life over the last two, and two and a half years. I'm just excited for people to hear something that I feel so personally invested in," Mandy Moore says, who adds that "I've never had the creative control and freedom to write and be a part of a record like I have with this one." 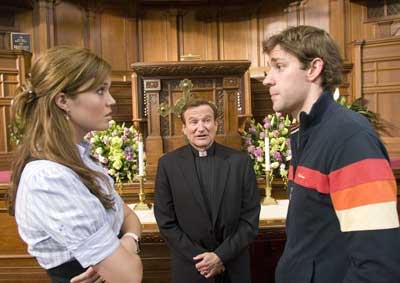 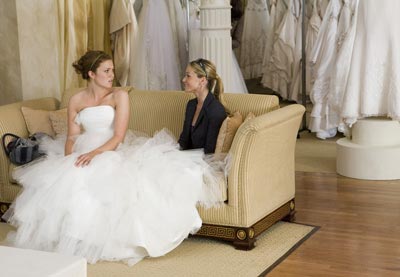 Mandy Moore says she loves going back and forth between music and acting and says balancing the two is easy. "It's like anybody else that has a lot on their plate. I love going back and forth and doing a little bit of both because it's, like I've said before, it really does fulfil me creatively in very, very different ways. So I mean, I took a nice long break from the music industry for a couple of years so it feels very refreshing to get back to it, to be singing again." And a new album means touring for the first time in a few years. "I think I'm going to go on tour at the end of the summer/beginning of fall." As for her future acting plans, "Dedication is coming out on August 24th and then I'm kind of waiting and seeing what's out there. I don't know, it's going to take quite a lot to get me off the road and to not be touring. It's a very special film to do that." In fact, rather than thinking of her next film, it's her next album about which she is contemplating. "I think I'd like to start working on something quirky like a little EP that's not necessarily like a Mandy record. I'm not quite sure, but maybe a little sort of poppy, sort of weird electronic dance record. I just want to do something different musically that maybe I wouldn't necessarily do as Mandy Moore."

License to Wed follows newly engaged Ben Murphy (John Krasinski) and his fiancée, Sadie Jones (Mandy Moore), who has always dreamed of getting married in a traditional wedding at her family church. The problem is St. Augustine's only has one wedding slot available in the next two years, and its charismatic pastor, Reverend Frank (Robin Williams), won't bless Ben and Sadie's union until they pass his patented, foolproof marriage-prep course.

Through outrageous classes, outlandish homework assignments and some pious manipulation, Ben and Sadie are about to find out if they really have what it takes to make it to the altar...and live happily ever after. 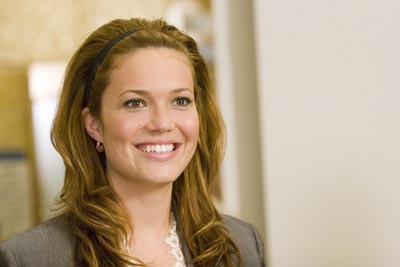