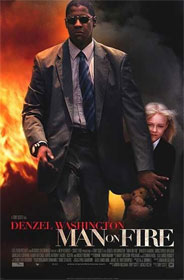 Synopsis:
Denzel Washington stars as a government operative/soldier of fortune, who has pretty much given up on life. In Mexico City, he reluctantly agrees to take a job to protect a child (Dakota Fanning) whose parents are threatened by a wave of kidnappings. He eventually becomes close to the child and their relationship reawakens and rekindles his spirit. When she is abducted, his fiery rage is unleashed on those he feels responsible, and he stops at nothing to save her.

My Verdict:
John Creasy (Denzel Washington) is a burnt out former soldier who is slowly drinking himself into oblivion in Mexico City. His friend Rayburn, (Christopher Walken) convinces him that life is worth living and he should get a job as a bodyguard since there are so many kidnappings happening. In the opening sequence of the movie, we are told via subtitles that a kidnapping occurs every 60 seconds in Latin America and there is a survival rate of only 70%.

So, Creasy does get himself a job as a bodyguard to Pita Ramos (Dakota Fanning) who is an only child to Samuel (Marc Anthony) and Lisa (Radha Mitchell). At first, Creasy takes on the job as just a job, not getting too involved with Pita but she soon breaks down his barrier and even has him coaching her at swimming. He soon realises through her eyes that his life is worth something, something that takes place during the first chapter of the movie. Of course, Pita is kidnapped one day whilst Creasy was taking her to a piano lesson. He is devastated and overcome with guilt so much that he vows to find who kidnapped her. And boy does he mean it. Nothing, absolutely nothing is going to stop him from a very fierce revengeful pursuit.

The setting of Mexico City uses the contrast of the very poor against the very rich, many of the rich also being corrupt and rich from illegal gain. Creasy has to penetrate these people to discover what and ultimately why Pita was kidnapped. He uses his previous skills as a soldier to go undercover and when he does catch his prey, some of his methods used to extract the information he needs are very, very brutal - not for the squeamish. The bulk of the movie is taken up with Creasy slowly linking together the network of criminals involved in this kidnapping. The action is relentless and very explosive with plenty of torturing of suspects.

'Man On Fire' is a very heavy movie, notwithstanding some tear-jerking moments by Dakota Fanning, and is very big on vengeance. Denzel Washington is a serious, believable John Creasy and the other standout is the gorgeous Dakota Fanning who will just melt your heart adding an excellent contrast to Washington. Although a relatively long movie it never feels too long and the finale is very poignant and emotional. Certainly worth a look.