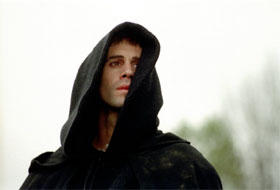 Synopsis:
In a time of international conflict and religious turmoil, one man stood up against tyranny and placed himself in harms way to defend his beliefs and those of his countrymen.

Rebel. Genius. Liberator. Martin Luther was all of these. His story could be taken from today's headlines, yet he lived 450 years ago. His beliefs and words are alive today in the lives of millions of people around the world.

"LUTHER" tells the amazing true story of one of the most influential men who ever lived. The film is an epic account of the passion of one man to ensure that his people could hear the words of Christ and that corruption in the church was defeated. His quest took him into direct conflict with the Vatican and The Inquisition. Yet he prevailed and a new religious and social order was created, one that lives on today.

My Verdict:
'Luther' begins in 1505 with a young Martin Luther caught in a fierce thunderstorm and after a near miss with a bolt of thunder, swears he will leave his legal studies and become a monk, if God would spare him, which of course he does. Joseph Fiennes is Martin Luther, in this very dramatic portrayal of a man who took on the Catholic Church in the 1500's and went on to create a new religious order, somewhat by default. It was not Luther's intention to go against the church, but as is shown, there were too many areas that he couldn't reconcile and felt so passionate about that he felt some inner obligation to try to bring about some sort of justice to the seemingly endless corruption. For example, at the time, the Catholic Church held a practice known as the selling of indulgences (shown here so well by Alfred Molina As Johann Tetzel), which would supposedly free a named relative's soul from purgatory and release them into heaven. For a price, one could buy a name. This incensed Luther who could not believe the church could place a price on anyone's soul, let alone actually take and pocket the money. This is just one area that the film shows with regard to the alleged corrupt practices of the Catholic Church. Luther was eventually branded a heretic, excommunicated by the Pope (Leo X) for his outpourings, exiled and goes on to produce the first translation of the New Testament Bible into German.

Fiennes is mostly able to show the often-depressed self-hating Luther as a fervent and at times almost over-zealous character that stands steadfast by his beliefs knowing it may be to his demise. A large support cast play havoc with Luther and his mind, seeking to destroy him or valiantly supporting and encouraging him. Sir Peter Ustinov has created perhaps the most endearing of these characters as Frederick the Wise, who wasn't particularly fond of Luther's teachings yet respected him for his quick and clever mind. Ustinov can say so much with such subtle facial features and it is a treat to watch him, in what was to become his last film.

Many of the indoor scenes appear staged almost for a television production or for the stage and so the outdoor scenes are perhaps the most appealing but perhaps the most disappointing aspect was the final act of the movie, which seemed to be raced through, especially Luther's marriage to Katharina von Bora (Claire Cox) and the actual formation of the Protestant Church. 'Luther' is a fascinating glimpse of such an historical religious figure and Martin Luther's role in challenging a formidable constitution.