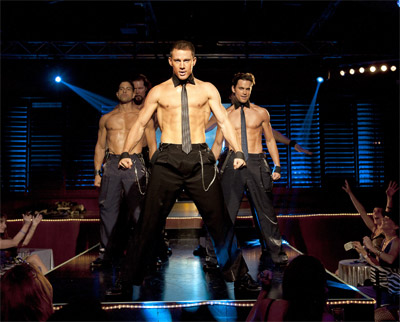 To a rebellious 19-year-old kid (Pettyfer) looking for independence from his family, Magic Mike (Tatum) seems like the perfect role model: he's got a nice car, a nice apartment, and a seemingly endless supply of women.
What's his secret?
He's a male stripper, and when the kid dives headlong into Magic Mike's world, his mad dancing skills and hunger for excitement make for an unforgettable summer…

Sexy, funny and shocking, this film is a hedonistic thrill ride with a powerful undertow. A razor sharp cast - led by top liner Channing Tatum in a career-defining turn as the titular Magic Mike - devours the up-to-the moment freight train of a script, and the result will be relentlessly entertaining and sure to be one of the most talked about films of the year… … and let's not forget the price-of-admission dancing sequences…

Verdict: Magic Mike provides an insightful and intense look into the life of a male stripper. Charming Channing Tatum's life experience inspired the film which is evident as it's as if his not even acting, he has lived this life, he can move, he was Mike. However, Matthew McConaughey steals the film with his hilarious portrayal of Dallas, the strip club owner, who enchants and entertains all female audiences.

Mike takes young Adam, under his wing and encourages him to join the strip show at Xquisite whilst he becomes drawn to his sister, Brooke. As Adam moves the film forward he showcases how innocence can be lost through poor life experience and how some people are unable to handle all the aspects of maturity, money and responsibility. Who'd have thought a film of eye candy could also contain drama, life lessons and romance?

Director Steven Soderbergh ensures the raunchy film floats along with a distinctive appearance and compelling characters and overall Magic Mike achieves what it ultimately set out to be - a light-hearted, fantastic and entertaining perve pleasure for all females.
Rating: ***
Brooke Hunter