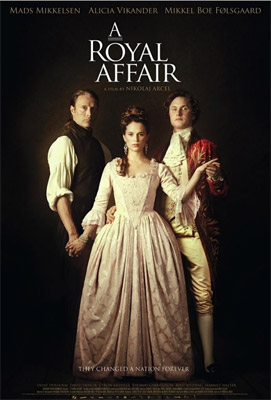 Synopsis: Denmark, 1766, and Caroline Mathilde is married to the mad and politically ineffectual King Christian VII. Ignored by the wild King who chooses to live scandalously, Caroline grows accustomed to a quiet existence in oppressed Copenhagen. When the King returns from a tour of Europe accompanied by Struensee, his new personal physician, Queen Caroline finds an unexpected ally within the kingdom. The attraction between the two is initially one of shared ideals and philosophy, but it soon turns into a passionate and clandestine affair.

Committed to the ideals of the Enlightenment that are banned in Denmark, Struensee convinces the King to assert his previously untapped power to remove the conservative political council and implement drastic changes to Danish society. As the Court plot their return to power and the downfall of the Queen and Struensee, the consequences of their affair are made clear and the entire nation will be changed forever

Directors Statement
A Royal Affair is based on one of the most dramatic events in Danish and indeed European history; whenever I used to pitch the film to foreign investors, people had a hard time believing that the story was true, that these momentous events had actually happened in the late 1700's. In Denmark however, it is taught in school, more than 15 books have been written about it (both factual and fictional) and there has even been an opera and a ballet. I feel honoured and extremely lucky to finally bring the full story to the screen.

Tonally, I was inspired by the great epics from the 40's and 50's where films would often feel like literary works, structured around characters and the passage of time, and not clearly following the obvious screenplay roadmaps.

But my creative team and I were also fired up by the idea of bringing the Scandinavian historical drama into the new century. We wanted to achieve this by adhering to a self imposed rule; we didn't want to "show" history, didn't want to dwell pointlessly on the big official events, the fancy dresses and hairdos, or the way the food was served.

Rather, we wanted people to simply experience the story through the eyes of the characters, taking the 1760's for granted. Even though the period is obviously there in the set designs, the costumes it was filmed and edited as we would have filmed and edited a film taking place in modern Copenhagen.