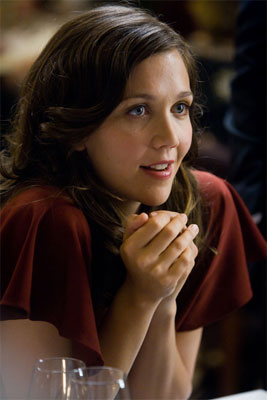 Beautiful Indie actress Maggie Gyllenhaal is usually to be found in small, Indie projects, rather than the likes of The Dark Knight, buit in taking over from Katie Holmes as Rachel Dawes, torn between her love for Batman and ambitious District Attorney Harvey Dent, Gyllenhaal has certainly picked the perfect Hollywood blockbuster to be a part of, as she explained to Paul Fischer.

Paul Fischer: Can you tell us about being in a terrific cast with so many terrific male actors?

Maggie Gyllenhaa: When you're acting with people who are really great, it's easier and it's more fun. I guess it was important to me, when I met Chris about doing it, that Rachel would be somebody who was a full-thinking woman, fierce and funny and smart and really someone with a mind which is not always the case in a big summer blockbuster. If there wasn't room for that, it wouldn't have been fun acting with all these great people. I think it was important to Chris as well that she be that way.


Paul Fischer: This isn't the kind of movie you would normally take on. What was the attraction for you?

Maggie Gyllenhaa: I think that, on some level, if it were what it isn't; this sort of big, dumb summer blockbuster movie, then yeah, I understand what you are saying but, truthfully, Gary Oldman and Michael Caine and Aaron Eckhart and Christian Bale and Heath and Morgan Freeman and a great director, it isn't really all that different from anything I've ever done. Also, although it is a fantasy on some level, the circumstances are larger than life, Chris, I think, really wanted all of us to play the scenes for truth so it didn't feel very different to me.


Paul Fischer: You have a really chilling moment with Heath Ledger in the party scene. What surprised you most about working with him? What do you think he brought to the table?

Maggie Gyllenhaa: I think that he is doing something in the movie that is really extraordinary and unusual even for the most talented and experienced actors in that he finds a stride that is totally free and when you're around that, it sort of bleeds down to everyone else and everyone else's work and so acting with him, even though the scene was scary and full of tension, it was actually really fun.


Paul Fischer: Did he go in and out of character when he wasn't shooting? 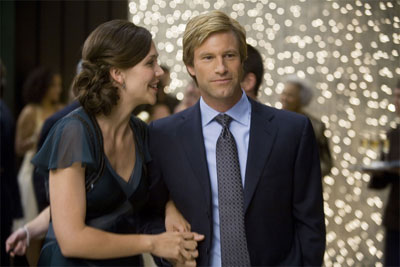 
Paul Fischer: Were you familiar with the whole Batman mythology? Did you have to get a crash course?

Maggie Gyllenhaa: No, I didn't know about it. I didn't really care about it at first either and I didn't really have to think about it for a while because the movie seemed so real and I would almost like forget I was in a Batman movie. And, then, there was one time that I'm doing a scene and I'm taking it really seriously and everything and some awful thing had happened and I'm doing the scene and papers and telephone and talking to someone and, all of a sudden I say, 'Believe me. Bruce Wayne's penthouse is the safest place in Gotham'. [laughter]. 'Oh, right. I'm in a Batman movie!' Then, I could hear, I sort of hit the beat and the music swelled and it was great. Then later, I did the stunt stuff and I was pushed off the building and we were shooting this stuff and Batman grabs me in the cape and saves me from death and I loved it and I kind of got it. Now that I've been in the movie I can feel how important Batman and the Batman mythology and the movies and the comics are to so many people. I just hope that we and that I have done justice to what's in their imaginations. I think about it very, very differently now.


Paul Fischer: The role was played by Katie Holmes in the first film. Did you take anything from her performance and was there any hesitation playing the role.

Maggie Gyllenhaa: Before I decided to do the movie, I wanted to make sure I had her blessing. I didn't want to do it if it wasn't okay with her and I was assured that I absolutely did. And then, I'm a fan of hers. I think she's a lovely actress and I thought she was great in the previous movie. I know her a tiny, tiny bit just here and there and I really admire what she did in the previous movie and, at the same time, I knew that it would be impossible to imitate her and I would be horrible at that. The only thing that I really could do was think of her as a new woman. At the same time, there is some plot point, some narrative stuff in the previous movie that's really important to this movie that she built. Like, at the end of the last movie, she said to Bruce Wayne, 'you know, I love you and I understand that you need to be Batman but I can't be with you if you're Batman' and that, of course, plays all the way through this movie and she made that. So, of course, what she did is resonating in this movie also.


Paul Fischer: Rachel has a wonderful wardrobe from tailored to really slinky. Did they let you keep anything and was there anything you were especially fond of?

Maggie Gyllenhaa: It's funny. The thing I loved the most is barely in the movie. I guess I should have worn it in a bigger scene or something. It was a beautiful jacket. All my clothes were made for me. That's where you feel the difference between the indie movie and a blockbuster! [laughter]. I had a seven month old when I started making this movie and a fourteen-month old when I finished and I stopped nursing her in the middle. I was surprised that you couldn't tell when you watch the movie but the wardrobe woman was unbelievable. She tailored all the clothes for me and she somehow nipped 'um and tucked 'um when I changed. She was really incredible. I really loved her. Also, on a set that didn't have many women, it was great to have this great woman [Lindy Hemming] there. This jacket I liked was a beautiful black jacket with a high collar. I wonder if you really see it? It's in the scene where Commissioner Gordon is killed and I'm sitting on the stage with Harvey Dent. It's a moment of chaos and I'm reaching for him and I'm wearing this great jacket. 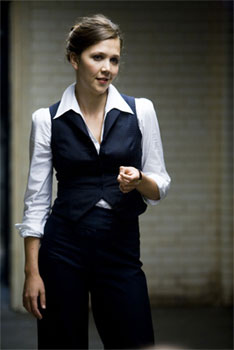 Paul Fischer: Being a mum now, are you more selective in the things you do based upon where they are filmed, etc.?

Maggie Gyllenhaa: Absolutely. Yeah. It's funny how it happens so organically. I hear people say this all the time but, then you hear yourself saying it and it becomes true. It's very hard to get me away from her. When this movie came along, I wasn't looking to work. I wasn't interested in working. This got me. I had to do this. It was just too good, all of it together. But, then for a long time afterward, I didn't work at all. Then, at some point, when my daughter was maybe fifteen months, I thought 'I really want to work now'. And I started to think, 'you know what? I'll do anything. I just really want to work'. And I'd read something and I'd think 'well, not anything' [laughter] and that started to happen so much that I started to think, 'do I really want to work? because I was just turning everything down.


Paul Fischer: What did you accept then?

Maggie Gyllenhaa: I did a movie with Sam Mendes that I finished in the spring. Now, I'm really looking for something but it's hard. When there's a writers' strike and you have new baby, it's like nothing's going to be good at this point.


Paul Fischer: Now there's a possibility of an actors' strike. There's a consensus that it's not going to happen.

Maggie Gyllenhaa: I don't know but I hope we can find a way to figure it out without a strike. Everyone I know really wants to work. My mom's a screenwriter and I went through the writers' strike with her. And, of course, as an actor you feel that hugely. I don't live in L.A. so I don't think I felt it as much as all the people who live here did. In New York, we don't feel it as a city, in the way that you did here but I really hope we can figure it out without having to strike.


Paul Fischer: What is that Mendes movie called?

Maggie Gyllenhaa: Farlanders. I'm in it with John Krasinski and Maya Rudolph.

Maggie Gyllenhaa: No. Just a plain old comedy. I play a woman who is a real hippy mom, into attachment parenting. Everyone sleeps in the same bed. She's still nursing her four-year-old.


Paul Fischer: Dark Knight is really guy-driven, unlike Mona Lisa Smile which featured a big group of women. Is the dynamic on the set just different? 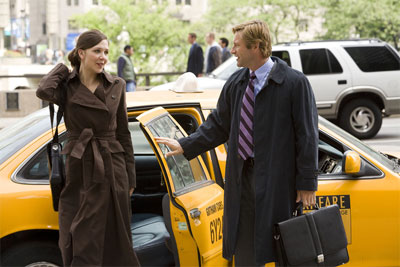 Paul Fischer: What about doing the action sequences, was that very different for you, like falling off the building?

Maggie Gyllenhaa: I'd never done anything like that before. Chris is not really into CGI. Of course, there's some in the movie but I think he tries to avoid it as much as he can. So, we shot big chunks of that stuff at once so I actually got to experience some of what it would actually feel like. Of course, I didn't drop from a 300 foot or story building or whatever but it looked like I did. It was easy to pretend that was what was happening. There was still acting in the midst of that though and it was fun.


Paul Fischer: How was it to play the love interest for Batman and Dent and you are their only hope for a normal life? [laughter]

Maggie Gyllenhaa: [laughing] I mean how do you think it feels? I know it's an enviable position but I also tried to make it as difficult for myself as I could. I decided that she really had to love them both absolutely equally and then it does become a problem.


Paul Fischer: Are you doing something called South Solitary?

Maggie Gyllenhaa: South Solitary is a script that I like. It's a tiny movie. The truth is, nobody finances tiny movies anymore. There's so many movies I like that I hope will get their money together but it's a different world than it was when I first started making independent movies.


Paul Fischer: Does that sadden you? Are you frustrated by it?

Maggie Gyllenhaa: Something's really wrong right now. [looking at her publicist] Am I allowed to say that? It's clear to me, I don't in any way credit myself as having started the independent film stuff but I was a part of it. I was a real part of it and I feel like things are soooo different now. You can't make a movie for three million dollars with like a kind of known actor in it. It's impossible and it has to do with, in general, the financial state of the country. It's tough for everybody in every business. But independent movies have really suffered I think.


Paul Fischer: Do you think Secretary would be in trouble now if there were trying to get funding?