A Maasai Ceremony Makes a Wedding to Remember KENYA - MAASAI MARA - If you are looking for something very different and unique for your wedding, then consider a traditional Maasai marriage ceremony.

Imagine donning traditional tribal regalia for a communally celebrated ceremony in one of the small villages near the Maasai Mara game reserve, complete with dances and chanting. Maniago Safaris Ltd. of Nairobi, the East African destination management company, can arrange for a bush wedding that will make your wedding day a memorable one.

For a large wedding with guests, the ceremony becomes elaborate. A goat is slaughtered and the groom is taken off to drink a locally made beer with the men. He then has to pay the bride's father a bride price - a nominal cow (as opposed to the several cows called for by Maasai tradition). 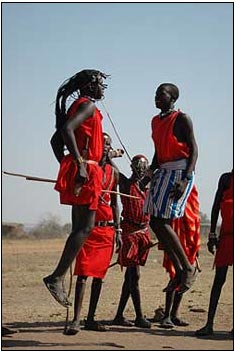 Village women, meanwhile, take the bride to get ready for the ceremony, singing to her all the while. Maniago can arrange to have a lovely white or tan bride's outfit made with Maasai beading on it, over which the bride wears the beaded marriage necklace and khanga. Joyful singing, chanting and dancing accompany the traditional union, as the guests join in. The groom then has to prove himself a worthy warrior and husband by participating in the jumping competition with other young morans (warriors).

The traditional ceremony is a public celebration of a couple's commitment in front of others, but it has no religious connotations and is not legally recognized under Kenyan law. Visitors can arrange for a civil marriage at Kenya government offices or have the district commissioner from the nearest town conduct a formal marriage, complete with certificates. 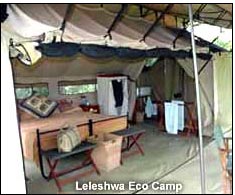 For the couple who are on honeymoon in Kenya, and wish to have an extra memory, Maniago can arrange for a small private traditional ceremony in which the bride is adorned with colorfully patterned khanga (cloth) and a beaded marriage necklace, while the groom is dressed in a shuka (man's cloth) and given a stick (rungu) to denote his manhood. These are bestowed by the village elder and one of his wives. For the newly wedded husband there is no getting away from the jumping competition even on this occasion

As part of its Maasai wedding package, Maniago arranges for accommodations at one of the lovely camps or lodges in the scenic reserve, as well as transportation for the guests to and from the village for the ceremony. After the ceremony the honeymoon continues within the Maasai Mara itself or throughout Kenya. 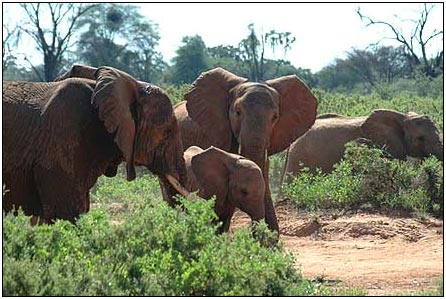 Maniago Safaris, one of East Africa's premier travel companies, has been designing custom bush vacations for nearly two decades. Directors Annabella Francescon and Duncan Muriuki liaise personally with each client to craft the perfect travel itinerary for an incredible experience of a life time, as well as drawing from a network of safari camps set amid Kenya's breathtaking landscape.