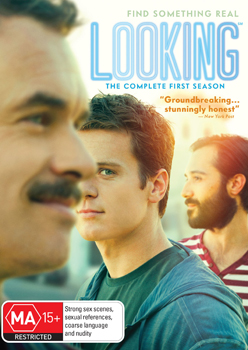 Looking offers up the unfiltered experiences of three close friends living – and loving – in modern-day San Francisco. Friendship may bind them, but each is at a markedly different point in his journey: Patrick (Jonathan Groff) is the 29-year-old video game designer getting back into the dating world in the wake of his ex's engagement; aspiring artist Agustín (Frankie J. Alvarez), 31, is questioning the idea of monogamy amid a move to domesticate with his boyfriend; and the group's oldest member, longtime waiter Dom (Murray Bartlett), 39, is facing middle age with romantic and professional dreams still unfulfilled. The trio's stories intertwine and unspool dramatically as they search for happiness and intimacy in an age of unparalleled choices – and rights – for gay men. Also important to the Looking mix is the progressive, unpredictable, sexually open culture of the Bay Area, with real San Francisco locations serving as a backdrop for the group's lives. Rounding out the Looking world are Dom's roommate Doris (Lauren Weedman), Agustín's boyfriend Frank (O.T. Fagbenle), and Patrick's co-worker Owen (Andrew Law), as well as love interests Kevin (Russell Tovey), Lynn (Scott Bakula), and Richie (Raúl Castillo).

Looking is a groundbreaking comedy that demonstrates, to varying degrees, the extent to which the gay lifestyle has gone mainstream. Unlike other recent TV shows about gay life, the focus of Looking is not just on sex and gay clubs, but on themes that everyone, gay and straight, can relate to: falling in love, finding professional fulfillment, forging an identity in a complicated world, searching for happiness.

Over the course of the first season's eight episodes, Patrick deals with a choice between two mates – one who speaks to his head (Kevin), and another who speaks to his heart (Richie) – while grappling with insecurities about who he is, what he wants, what his parents and friends think. Agustín, an artist who fancies himself a radical, struggles with the idea of domestication; with his boyfriend Frank's support, he strives to reach an ideal he set for himself, but is afraid he won't get there. And Dom, older than his friends but still unsure of his future, starts a relationship with a man in his 60s (played by Scott Bakula) – a shift from Dom's prior obsession with youth and beauty.