Synopsis:
When God loses faith in Mankind, he sends his legion of angels to bring on the Apocalypse. Archangel Michael (Paul Bettany) is our only hope of survival as he attempts to protect a group of strangers, one of whom is pregnant with humanity's savior, from an army of terrifying demons.


A dusty diner in the Mojave Desert becomes ground zero for earth's finalshowdown in Legion, a startlingly original and terrifying vision of the Apocalypse fromdirector and writer Scott Stewart (Priest). As mankind destroys itself in a savage fury, asmall group of people trapped on the edge of nowhere prepare to make a last stand-with the help of a mysterious and powerful stranger.

Unaware of the chaos unfolding around the globe, Bob Hanson (Dennis Quaid),the owner of a remote roadside café, and his partner Percy (Charles S. Dutton) go aboutbusiness as usual. The restaurant's beautiful and very pregnant waitress, Charlie(Adrianne Palicki), serves breakfast to Sandra and Howard, a well-heeled suburbancouple (Kate Walsh and Jon Tenney) and their teenage daughter Audrey (Willa Holland),as they wait for their car to be repaired by Bob's son, Jeep (Lucas Black).

When the television goes on the fritz and the phones go out, the group realizesthey have lost all communication with the outside world. As they attempt to make senseof what's happening-An earthquake? A terrorist attack?- an elderly woman (JeannetteMiller) arrives and sweetly orders a steak from Charlie. When her meal arrives, shebegins spewing shocking obscenities. In a heartbeat, the fragile old lady developssuperhuman strength, launching a grisly attack that leaves Howard critically injured.A desperate attempt to get medical help ends when an impenetrable cloud offlying insects turns the diner into the only safe haven for miles. As the horrifying truth oftheir situation sinks in, a stranger (Paul Bettany) joins them with an arsenal of stolenweapons. He informs Charlie that her unborn baby is now humanity's only hope, andhe's willing to do whatever it takes to save it.

The world is about to become a waking nightmare for the last remnants ofmankind as rolling caravans of crazed killers arrive in search of fresh victims and anarmy of warrior angels bent on total destruction follows close behind them in a uniqueand terrifying glimpse of the End of Days. 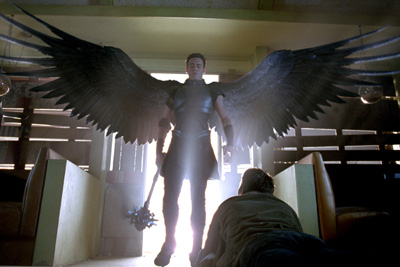 Veteran producer David Lancaster first read the script of Legion, a horror moviewith an apocalyptic scenario, six years ago. Lancaster, co-president of Bold Films,recalls, "I knew it had strong genre appeal, but I also knew that with the rightcombination of script, director and cast, it had the potential to appeal to a much largeraudience."

Convinced the film could be far more than a conventional fright-fest, Lancasterenlisted the help of screenwriter and visual effects wizard Scott Stewart to rewrite thescript. Intrigued by the idea, Scott Stewart re-conceived the story as a more richly-realized,character-focused piece.

Scott Stewart's script also took a "less is more" approach to the horror elements. "Theoriginal was a more explicit, 'we're going to show you everything,' way of telling thestory, as opposed to, 'we're going to keep you in the dark for a while,'" he says."Darkness is the scariest thing. The anticipation of the scare is better than the scareitself. You want to tighten the screws all the time as a filmmaker and ratchet up thetension.

"My favorite scary movies are the ones that take their time to let things evolve, soyou get invested in the characters and what they're going through," he continues. "Thenyou can really deliver the goods."

While working on the story, Scott Stewart kept what he calls "the concept of theuncanny" in mind at all times. "It comes from Freud originally," he says. "He was definingthe difference between the fantastic and the scary. A dragon is fantastic. Dad standing inthe middle of the kitchen with an axe is scary. Something familiar put in a context thatmakes no sense to us emotionally or logically is deeply unsettling. That's the coreconceit of Legion."

Lancaster was so impressed by Scott Stewart's ambitious concept for the movie, heasked him to direct it. "Scott grasped the mythology of the story extremely well," says theproducer, whose resume includes A Love Song for Bobbie Long and a co-producercredit on Bobby. "And he executed the rewrite in an extraordinary way. I could see thathe and I shared the same vision for the piece. I didn't care that he was a first-timefeature director. I believed in every aspect of what he brought to the script as a writer,and the fact that he had accomplished so much in his visual effects work made it a reallyexciting gamble to take."

After studying screenwriting at N.Y.U. Film School, Scott Stewart joined Industrial Lightand Magic, the legendary visual effects company established by George Lucas. "It wasan incredible education, almost a film school in itself," he says. "But as a filmmaker,there were things I wanted to be able to do on my own."

Scott Stewart and two friends then went on to found The Orphanage, which hasbecome one of Hollywood's pre-eminent visual effects houses, contributing to dozens ofblockbusters including Ironman, Pirates of the Caribbean: At World's End, Night at theMuseum and Harry Potter and the Goblet of Fire. Their concept was to be able to makeoriginal films in addition to providing special effects for other movies. Legion is, in manyrespects, the achievement of that dream. 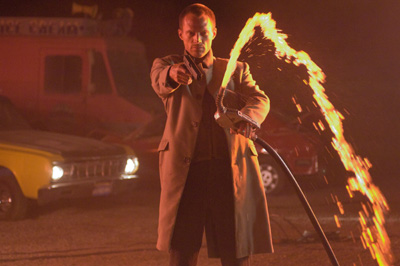 "Having that background helped me pre-visualize Legion," says Scott Stewart. "Istoryboarded virtually every shot of the movie. Having done visual effects for big movies,I was not intimidated by the technical challenges. At the same time, coming from thatworld, I'm deeply suspicious of the overuse of digital effects, so I wanted to do as muchpractically as possible."

The completed script attracted the attention of Clint Culpepper, president of SonyPictures Entertainment's Screen Gems label. "Clint is a real showman," says Scott Stewart."He knows what he's on the hunt for, and he zeroed right in on this."

According to Lancaster, Culpepper was an early believer in the idea that Legionwas far more than a genre film. "Clint responded very strongly to this script. He was asingular contributor to this process and I'm eternally grateful to him. With his support, wewere able to reach some really fine actors who might not have been interestedotherwise."

The filmmakers saw the apocalyptic setting of Legion as an opportunity toexplore larger themes within a highly entertaining action-horror film. While the film is notreligious in nature, it does use elements of familiar narratives to tell its tale. "Whetheryou grew up in a religious home or not, we live in a society that has religion at its core,"Scott Stewart points out. "The movie isn't attempting to say anything about particular beliefs. Itis about the idea of faith, using things that are familiar to us from Judeo-Christianideology as a way to tell the story. No matter what your bent is philosophically, you canbring that to this movie."

If it seems provocative, that's what Scott Stewart intends. "The film pushes buttons andit's meant to push buttons," he says. "I hope it's somewhat controversial. In the end, it'smeant to be entertaining, but I hope it's thought provoking as well. That's what takes itout of the realm of the standard thriller."

The film's characters represent a cross-section of America: A man on his way toa custody hearing for his child, a married couple struggling with their teenage daughter,a young woman about to have a baby she never wanted. "The characters aresurrounded by a comforting normalcy," says Scott Stewart. "Then, layer by layer, thosecomforts are stripped away. The sense that everything is okay starts to dissipate. TheTV goes out, then the radio. Something is happening, slowly but surely. A little old lady,a minivan family, the ice cream man-all these very familiar things take on newsignificance. The world's gotten a little sideways."

With his long-planned film ready to go into theaters, Lancaster wants to assureaudiences that Legion delivers thrills up there with the best of its genre. "I love to makemovies," says the producer. "This one brings together more of the elements of dramaand spectacle and production value than I've ever experienced. We've got great actors,plus visual effects and fight sequences and big action sequences with lots of movingparts and hundreds of extras. With all of the different elements that had to be combined,it was a particularly wonderful project for me."