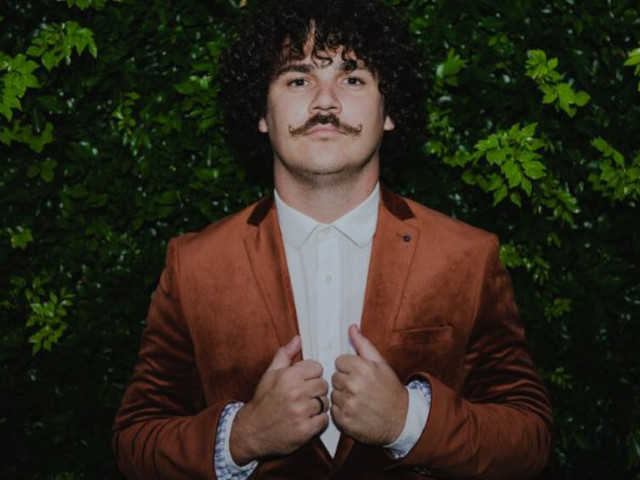 In the four years that have passed since his acclaimed Stories To Tell project, Just A Gent has continued to solidify his presence as one of Australia's premier producers and musicians. Entering the game young and quickly snatching attention of audiences and industry alike in Australia and abroad, Just A Gent refused to let early success pause his creative hustle.

The album was a natural step in the evolution of Just A Gent as an artist and a fitting touchstone in his career, which is already littered with impressive achievements. The release of Stories To Tell has racked up over 20 million streams, kicking Just A Gent's overall streaming numbers up significantly (currently he enjoys over 200 million on Spotify alone).

It's this determination and undeterred vision that has kept his spirits high in recent years, and has brought him to now: embracing a whole new creative chapter, sharing it with fans today in new album Planet Oasis.

Across 2021 and 2022, fans have heard the album teased with the release of popular singles like 'Who Would Have Thought (ft. Arno Faraji)', 'Sleeptalking (ft. Greta Stanley)', 'Lightspeed', 'Trip To Mars (ft. Sammi Constantine)' and most recently 'Don't Wait For Me (ft. Lani Rose)'. The tracks highlight Just A Gent's natural ear for this sort of music; expertly weaving and arranging electronic patterns, fused with elements of hip hop, dance and stunning work.

The album, recorded by Just A Gent in Mindaribba on Wonnarua country (Maitland, NSW), proved to be more than a passion project as the guest vocalist and collaborator list began to grow. His vision fused with the individuality of each guest, lending new and unique flavour to each track.

"Creating this record spanned over five years. It's changed a lot over the course of that time. I've sat on various versions of the album but felt this version was the strongest.

Most of the tracks on Planet Oasis are collaborations with some of my favorite talents from around the globe. Some of my best mates in the scene like Lani Rose, Jacknife & Samsaruh. It just felt right to be working with people I cherish and admire everything they do. I worked with Jon Hrubesch on the artworks, he has helped tell my story for the past eight years, his mind and creativity is unmatched. Wiese.world was the other leading hand in terms of visuals, we have also worked together for years and he is the animation GOAT.

It feels so good to finally be able to share this with you and I hope it takes you to places you have never been before." - JUST A GENT

An album like Planet Oasis arrives at a perfect time where music fans are itching to experience this sort of music in its natural habitat: on a sweaty dancefloor or out in a massive festival setting.

Songs like 'Nova' and 'Island Fever' (fan favourites, both released in 2021) are perfect examples of the album's ability to make the listener want to turn up and party. And yet, Planet Oasis offers different levels of engagement. 'Out Of Order' goes heavy with glitchy, industrial goodness, while title track 'Planet Oasis' (also the album's final single) is a Just A Gent master move.

A formidable force in Australian production, Just A Gent once again proves his place and legacy with an album like Planet Oasis - we're invited to take a trip to it.