New Menu Explores the Powerful Link between Family and Food

Inspired by his close relationship with his own nonna and love for her food and family feasting, Gradi's owner and chef Johnny Di Francesco has searched for Australia's best unsung nonna heroes in Australian kitchens - to star on his Piatti Dei Nonni menu at Gradi at Crown.

Three Aussie nonnas have been plucked from their family kitchen to Gradi - to showcase their much loved family cooking traditions available for all to try during the Piatti Dei Nonni menu which will run from August 14 only at Crown.

As part of the process, the Gradi team searched through almost 100 mouth-watering submissions from Victorian nonnas and nonnos to find three to feature at Gradi Crown. When selecting the winning recipes, the team were looking for recipes that had their own tale and touched on family and generational stories and were blown away with the responses, which delivered all that and more.

The winning nonnas - Nonna Rita, Nonna Concetta and Nonna Elena's - signature dishes will be available to everyone, not just their lucky nearest and dearest. Each recipe will stay true to its creator – from extra lashings of gorgonzola to hearty dollops of cream – the Gradi chefs will follow each nonna's closely guarded secret recipe to the letter.

Di Francesco says it's been an emotional journey developing this menu with the nonnas, making him reminisce about the influence his own nonna has had on his life and ultimately his career. "My nonna, Angela has been an incredible inspiration to me, living by the ethos that cooking must come from the heart – and that sometimes it's okay to break the rules. She's one of the strongest women I know – even at 93; she's still the boss in the kitchen!"

"Growing up at my nonna's taught me the power of food as a connecting force – it was there that family came together over a shared meal. This is the sentiment we are replicating at Gradi Crown, by making nonna-style cooking available to all Melburnians, no matter their heritage."

Available for a limited time from 14 August, the three winning dishes are:
ENTREE – NONNA RITA'S CAULIFLOWER FRITTERS: Nonna Rita's specialty is her moreish, crispy cauliflower fritters, which get gobbled up at lightning speed at every family get-together. She proudly grows a range of vegetables on her Werribee South farm and is passionate about fresh produce, dishing up these much-loved family favourites every season for the past 45 years.

MAIN – NONNA CONCETTA'S SPINACH AND RICOTTA CANNELLONI: Nonna Concetta knows all about catering for a big family. At just eight-years-old, she was taken out of school to help her mother cook for her 13 siblings, in the small town of Rosolini, Sicily. Her mother's hearty and deliciously cheesy spinach and ricotta cannelloni has always stuck with her – fasttrack 67 years and she still cooks with these Sicilian flavours, expressing her love for her family through food.

DESSERT – NONNA ELENA'S BIGNE: In 1973, Nonna Elena went to visit her mother one last time in the medieval village of Cugnoli, Abruzzo. It was an emotional trip, but while there she learnt to make her mother's custard filled choux pastry dessert, bigne. Whenever she feels nostalgic she prepares this indulgent dish, which brings her family, and in turn Nonna Elena much joy. She says this recipe "cannot be written, must be seen and tasted!".

Question: Can you tell us about the special new Piatti dei Nonni menu?

Johnny Di Francesco: Inspired by the nonnas of Victoria, Piatti dei Nonni pays homage to the unsung nonna heroes residing in Melbourne. The limited time only menu aims to highlight the passion and love nonna's bring to the kitchen table when cooking for their family and loved ones. Understanding that everyone in Melbourne might not have their very own nonna to cook for them in family gatherings, the Piatti dei Nonni hopes to recreate the family warmth, as the three winning Aussie nonna's offer their beloved family recipes to be recreated at Gradi at Crown.


Question: What was your main inspiration behind the Piatti dei Nonni menu?

Johnny Di Francesco: The relationship with my nonna Angela has always been a close one. Growing up, she was always providing me with nuggets of wisdom relating to food and life. One that really stood out to me was how cooking must always come from the heart and that passion is the secret ingredient to serving up a tasty dish. I wanted those who dine at Gradi at Crown to experience the traditional home cooked meals that will transport them to the dinner table of a nonnas home. I wanted to ensure that everyone is given the opportunity to experience nonna-style cooking; regardless of their heritage.


Question: Can you tell us about the three incredible nonnas that contributed to this menu?

Dessert - Nonna Elena's Bigne: When visiting her mother one last time in the medieval village of Cugnoli, Abruzzo, Nonna Elena was taught her mother's custard filled choux pastry dessert, Bigne. Fast forward to present day and the memory of Nonna Elena's mother is still kept alive through this sweet treat as it brings her family together. She says this recipe "cannot be written, must be seen and tasted!" 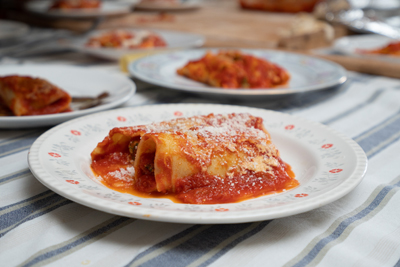 Question: What did you learn whilst spending time the three contributing nonnas?

Johnny Di Francesco: We're in the thick of a generation where everything is constantly evolving; where food can often be quite experimental and radical. The three contributing nonnas, along with my very own Nonna Angela have reminded me of the importance of going back to basics and how it's important to celebrate old traditions, just as much as embracing new ones.


Question: What do you love most about this Piatti dei Nonni menu?

Johnny Di Francesco: I love how it has such a heavy emphasis on the importance of family and passion when it comes to cooking. It's been such an emotional journey working on the Piatti dei Nonni menu alongside the three contributing nonnas as it transports me back to my childhood and how family reunions played such a vital role in my passion for cooking. I'm incredibly excited for Melburnians to get a taste of nonna's home cooking as the limited time menu is on offer at Gradi at Crown from August 14th to September 19th.


Question: What's next for you and Gradi?

Johnny Di Francesco: The Gradi Group has experienced a significant increase within the last few years, and the momentum is only growing which is very exciting. We have recently expanded to Adelaide, Marvel Stadium and will soon be opening in Dallas, Texas in September, and with more locations on the horizon both domestically and internationally. The idea of launching more success stories with our stores over the coming years would be a dream come true. We will of course continue to impress our customers with fresh menu additions, as well as instilling nostalgia through classic dishes and further enhancing old favourites.