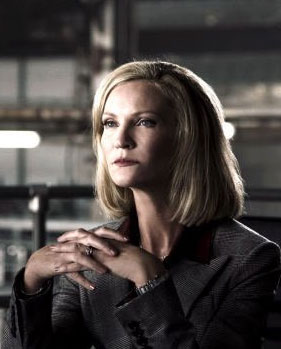 By Scott Essman for Universal International

In over 30 films from the mid-1980s, Joan Allen has been one of America's premiere working character actresses. She commanded a series of smaller supporting roles 20 years ago before graduating to play a series of famous screen wives in acclaimed films with notable directors ranging from Francis Ford Coppola's Tucker to Steve Zaillian's Searching for Bobby Fischer to Oliver Stone's Nixon.

By the late 1990s, her star shone and she gained every more sumptuous parts, such as in 1997's The Ice Storm and 1998's Pleasantville, showing her amazing range for creating unique and varied female characters.

Always likeable onscreen, Joan Allen continued to grace the screen with her presence in the new century, with memorable starring turns in The Contender and The Notebook before landing the part of tough governmental operative Pamela Landy Bourne sequels The Bourne Supremacy and The Bourne Ultimatum.

Joan Allen was cast in DEATH RACE as the evil prison warden who blackmails inmates and pits driver against driver in a race to the death, all in the name of reality TV ratings.

An Illinois native and current New York resident, Joan Allen is also returning to the stage for the first time in nearly 20 years in between film roles. Her busy schedule which includes an upcoming role in a Hachiko film, dictates that she chooses every role carefully. As such, DEATH RACE is sure to present her to still new audiences.

In this interview, Joan Allen, 52 this year, talks about her craft, her choices, and creating memorable characters - whether likeable or evil.

Q: So, let's start with the cars. Do you race in real life?


Q: How many speeding tickets?

JOAN ALLEN: I think I have gotten a speeding ticket or two in my life. I live in New York so Idon't drive all that much so when I do drive, I actually really love it when I go outside of the city.But not like these guys drive in this movie.


Q: How did you get involved with the film in the first place?

JOAN ALLEN: I heard yesterday that Paul wrote the part thinking of me. They asked if Iwanted to do it and I read it and thought it was fantastic and such a different departure for mewhich made me very happy and excited. I thought the story was really good. I cared about thisguy and what was going to happen to him and I just felt the character was very delicious and funand different.


Q: What did you like about her because she isn't really likeable. Were you comfortable withthat?

JOAN ALLEN: It's fun to be the bad guy. I think most actors say that, and it really is fun to bethe bad guy because you have permission to do reprehensible things.


Q: Are you like your character, can you be tougher than the guys at times?

JOAN ALLEN: I think women in that position do come off tougher. You expect them to besofter and so when a woman presents herself that way, they just all know she's a bitch.


Q: You act with your eyes quite a lot. Without any words you can convey the idea. I'm thinkingof in Pleasantville when you turned around and you're in black and white, and you're looking atToby McGuire. That's an unforgettable look. And in this movie when they crash your truck thatyou've been building for eons, you have another look. This is like the first time she's vulnerable.Can you talk about how you act without words and how you come up with these great momentslike in this movie?

JOAN ALLEN: You go through just thinking in your mind what is actually going on andhopefully it translates to your face. I like all kinds of acting but one type I'm particularly drawn tothe nonverbal because so much in life is conveyed nonverbally. The majority of communicationreally is nonverbal.

JOAN ALLEN: He was so excited to be directing this. You're just seeing his faith every daybecause he'd been wanting to make the movie for such a long time. It takes sometimes yearsfor the plan to really come to be. He was like a kid, and because my character was sooutrageously evil, we had a lot of fun. Paul really loves actors. He is very supportive of themand very gentle when he speaks to you, giving suggestions. He's got a really great eye andthat's just really what we hope for when you're working.


Q: What about working with Jason Statham?

JOAN ALLEN: I think he just comes off so powerfully on film. He really does. I love it becausewe come from different worlds really if you look at the films that I've done in the past. I reallylove that because sometimes I think a really interesting chemistry can develop when you comefrom these different places. We're both very, very strong characters in the film. He obviouslyon the side of good and me on the side of evil.

JOAN ALLEN: He's very softly spoken and very disciplined. He had to work incredibly hardbecause on top of shooting almost every day he had a very rigorous physical regime. He hada trainer that he had to work with almost every day. I know he was on a very special diet too.He was very disciplined about that and I respected him tremendously. He's got a nice sense ofhumor and he's low key and very easy to work with.


Q: Speaking of your talent, you are going to do Broadway and "Impressionism". Can we talk alittle bit about that? How does it feel to go back to the stage after 19 years?

JOAN ALLEN: "Impressionism" is a brand new play. I had no intention of going back toBroadway. An old director friend of mine called me out of the blue and said, "I've got thisgorgeous play, you have to read it. You have to do it." Within 15 minutes he was standing inmy living room handing it to me. I said, "I haven't done a play in 18 years." He said, "Darling,darling, that doesn't matter". I read it the next day. It's such beautiful writing, I was just like, Ihave to do it.. The play takes place in an art gallery and it's about the relationship betweenJeremy Irons and myself. I run the art gallery and I hired him a couple of years ago. He used tobe a photographer and it's a love story but it's also about art and your impression of art and howart reflects on your own life. It's just beautiful, and it's funny and it's a love story too.


Q: So, how does she feel that she's seen her mom so tough and evil? In real life, is she theone actually bosses you around?

JOAN ALLEN: Most of the time it is like that. In life she has a tougher skin than I do for real.But I saw this one last week in a screening. I brought 1 friend, she brought 8 friends. She'svery social. Her friends just had a ball. They were like, "you're so different from that character.You're really different from her. You're so nice."


Q: Does she think Mom is cool now?


Q: Does she want to follow in your acting footsteps?

JOAN ALLEN: She does want to do some acting. I think she's done some great things. She'sreally good, actually, and she's a great comedienne. She's done some plays at school and she'svery good. She's taking an acting class for teenagers in just about a week or so, for like twoand a half weeks, so we'll see how that goes.