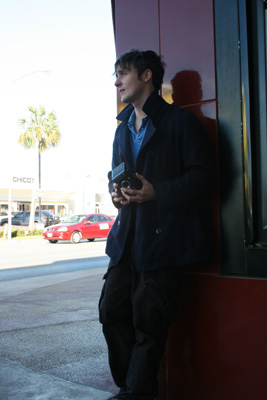 James Holzier, (pronounced hole-sure), is one of the hottest rising actors in Hollywood.

James Clayton Holzier was born August 11, in Fairfax, Virginia, USA. It was a miracle that he was born at all, since his mother was told she would never have the boy she longed for so much. Although pre-mature young James survived and when the family moved to Houston, Texas he began to blossom.

A fire accident burned him when he was 19 and no scars ever appeared even though he was burned over his face.

James began acting at an early age appearing in numerous television commercials and small movie roles as a child and a teenager. He gravitated to drama while attending High School in Houston where his skills were evident as he took on a variety of starring roles in Productions.

Voted by his classmates as one of the "Friendliest" and "Best All Around", James knew that he wanted to act, but this Leo, was set back when he was injured again, this time being impaled on a fence in a fall.Again not expecting to live, he fought and recovered after numerous injuries.

All Media Guide has named James Holzier one of the most popular male celebrities emerging. (2009)

Described as the 'Next James Dean' by Hollywood Insiders, this breakout star is ready to explode, because of his personality that has a worldwide following waiting in the wings for his breakout role in his first feature film, 'Live for Us' scheduled for release in 2010. With three other films scheduled to follow.

Tell us what has been going on with you:

James Holzier: A lot has been going on and a lot will be coming. I think I might need a vacation to Australia. I am in production now of a film called, 'Live For Us'. Which is a modern age love story. Kind of like an old movie called Rebel Without a Cause with James Dean and the film Serendipity. I am sure you have heard of that. It is with John Cusack. And then I have two other films stated after that, and I am scheduled to be flying to Madrid soon for another film. But a lot is going on and I would love that visit to Australia!


What is next for you, in your career?

James Holzier: Like I said 'Live For Us', and then three other films after that. I will keep you posted but I know you will be hearing a lot about it! But I will say this everything that I always give it 100% of my focus. So, each film I do will always have my 100% focus and dedication...


What have you enjoyed most about acting?

James Holzier: I love it! I really do. I can't just pick one thing I have always loved it since I was a kid. It is just what I get. Impossible to pick one thing. But I love it.., All of it.


Do you have a partner, if not, what do you look for in a partner?

James Holzier: Ahaha what do I look for in a girlfriend? I like a girl who is sweet has a big heart; who is a romantic, who can laugh and have fun! Who may want to go out one night and the next night just stay and watch movies. I just hope this is a girl somewhere out there in the world thinking about me....


What/who was your inspiration to go into the industry?

James Holzier: My inspiration was not a person. It was just loving it falling in love with it ya know...I love it and you know that. But my inspiration is it all. I love it all.

James Holzier: Wow... They are everything… I know if it wasn't for them I wouldn't be where I am, at all. I am so grateful for them. They make you what you are. And if I could do anything for them I will and would. I just love them. I mean they really are everything. I appreciate them so much.

James Holzier: Anybody can inspire me. For any reason!


Did you take acting lessons?

James Holzier: I have taken acting lessons my whole life since I was like 9 years old. I have always loved it and will always. Acting lessons, workshops, you name it. I have done it, but one thing I heard Dustin Hoffman say...is that everyday in itself is an acting lesson. So, I thought that was really cool. I look at it like that. It is just he said when he would work at this mall he used to talk to people in British accents or use that as a chance to perform while he was doing his job. I thought that was cool and trust me I have done my share of accents when I was working too. That was fun.


What are you looking forward too?

James Holzier: I am looking forward to everything of course! I know a lot is going on, but honestly I don't look at it like that. I just do what makes me happy and it all falls into place. Every film I do it will be something I put my 100% and all into. That will never change.


60 Second Quiz
Full Name: James Clayton Holzier
Nickname(s): Jimmy
Star Sign: Leo
Music Talent: I can dance really well in the car or shower. As far as singing, I am just gonna say....I attempt it, and that is okay with me…
Favorite Food: Pizza...that is my favorite.
Favorite Film: My favorite film growing up was Braveheart.
Favorite Actor: Hmmmm it's got to be a couple people. I am a big fan of Johnny Depp but only in the sense to where how he can play anything. But I would have to say...really my favorites are, Sean Penn, James Dean they are real good actors in ways I can relate too and Heath Ledger was amazing in The Dark Knight.
Pet: I have a pet dog named baby. And she is a shitzu...and I tell you what...she is definitely not short a meal. She looks like Garfield...but a dog. It is funny!
Describe yourself in 3 words: Hmmm humble, fun, and passionate.
Best Feature: That is a good one!! I would have to say, ask people who have talked to me! Cause it is hard to say... sometimes I am like, I have a good feature? :) It is just hard for me to look at myself that way. But, I am going to go with smile or stomach.
Worst Feature: I am going to go with I have arched feet, and I know you weren't expecting that answer, but.... yeah. I have dancer feet...it is true lol
Person You Would Most Like to Meet: Are we going to go with alive or passed away cause there is a couple?? I really don't know… definitely someone I admire.
Hobbies/Interests: I know this is silly, but I can really do anything and have fun anywhere. I will just name a bunch of stuff how about that. I like going to the movies. I like to play basketball, play soccer, and watch football. I like to hang out with the right person. If I was by a beach, I would go to the beach. In the mountains I would go skiing and try not to hurt myself or just play in the snow cause that is always fun! I know this is random but sometimes I will go for drives in my car and just listen to music.
First Job: My first job was lifeguarding and this was where I grew up.
Are you a Pub, Bar or Club kind: I am not really any of those to be honest. There is nothing wrong with that and I think it is totally cool. But, I am not the kind of guy who will be there till like 3am in the morning or stumbling out of a pub not remembering my name. I am the kind of guy who will do all 3 and have fun.
What Can You Never Leave Home Without: License, definitely. But I would have to go with pants. Nah I am really going to have to say cell phone. You can't leave home without it.
What is the first thing you think of when you wake up in the morning: "today is gonna be a great day." or if it is really early, "man, I am tired." lol