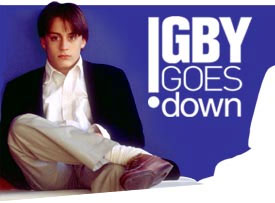 Synopsis: Igby Slocumb (Kieran Culkin), a rebellious and sarcastic seventeen-year-old boy, is at war with the stifling world of "old money" privilege he was born in to. With a schizophrenic father (Bill Pullman), a self-absorbed, distant mother (Susan Sarandon), and a shark-like young republican big brother (Ryan Phillippe), Igby figures there must be a better life out there - and sets about finding it.
Happily flunking out of yet another prep school, Igby is sent off to a military academy in the dreaded Midwest. With the aid of his mother's pilfered credit card, he goes on the lam. His darkly comedic voyage eventually lands him in New York, where he hides out at his godfather's (Jeff Goldblum) weekend pied-a-terre. There he encounters a deviant cast of characters, including his godfather's trophy choreographer girlfriend (Amanda Peet) and the terminally bored Sookie Sapperstein (Claire Danes). In his quest to free himself from the oppressive dysfunction of his family, Igby's struggles veer from the comic to the tragic in an ultimately noble attempt to keep himself from "going down."

My Verdict: Igby Goes Down is the sort of movie that just when you think you know where it's going, it changes direction. It is this aspect that makes it so entertaining.
Kieran Culkin is just so great in the leading role and shows a diverse range of emotions. Igby is so confused about his role in life and Kieran captures the dilemmas he faces so well. Igby spends the time searching for an answer and stumbles and falls and gets himself up again, time and time again. Igby has perfected sarcasm and cynicism to perfection and has some great one-liners, even for a 17 year old.
Susan Sarandon is an absolute delight as Mimi, Igby's mother. She is such enigma to Igby and seems perfectly happy to continue to puzzle him. She can be quite cold and calculating but then make a remark that cancels everything she has just said. "His creation was an act of animosity. Why shouldn't his life be?" she says when talking about Igby. Susan is just so easy to watch and at times so infuriating at her attempts of being a mother.
Ryan Phillippe is super smooth as Igby's older, almost estranged brother Oliver. Even though they are brothers, they have almost nothing in common, yet he is constantly looking out for Igby, something he begrudges yet endures.
Jeff Goldblum as D.H. Banes, Igby's godfather, is another person in Igby's life that seems destined to try to bring Igby down. He is just as enigmatic as all the other people in Igby's life and in one scene, he shocks even Igby with his unpredictable behaviour.
The biggest mystery in Igby's life is his father, Jason, played by Bill Pullman. Igby watches his father's demise into schizophrenia while he is growing up and the effects continue to haunt him.
Essentially, everybody in Igby's life is trying to bring him down. He is determined that he can overcome any obstacle and choose his own destiny. Joining Igby in his search is fun and never once did I feel like I wanted to take Igby down. And the reason that Igby is called Igby? I won't spoil it for you - you'll have to find that one out for yourself!