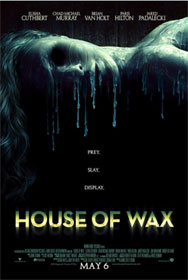 Synopsis:
A road trip to one of the biggest college football games of the year takes a turn for the worst for Carly (Elisha Cuthbert), Paige (Paris Hilton) and their friends when they decide to camp out for the night before heading to the game. A confrontation with a mysterious trucker at the camp site leaves everyone unsettled, and Carly has her hands full trying to keep the peace between her boyfriend Wade (Jared Padalecki) and her hot-headed brother Nick (Chad Michael-Murray).

They wake up the next morning to find that their car might have been deliberately tampered with. At the risk of being stranded, they accept a local's invitation for a ride into Ambrose, the only town for miles. Once there, they are drawn to Ambrose's main attraction-Trudy's House of Wax, which is filled with remarkably life-like wax sculptures. But as they soon discover, there is a shocking reason the exhibits look so real.

My Verdict:
'House of Wax' is a formulaic horror movie that manages to scare somewhat convincingly, taking its name from the 1953 horror classic of the same name starring Vincent Price. Two carloads of young friends are on their way to watch a big game of college football and rather than drive on through the night, they decide to camp out and continue in the morning. They are young; all seem to have issues (who doesn't in this age group?) and are just generally trying to get through their lives in the easiest, most fun way possible.

After a brief encounter with a strange driver at the campsite, the group discover one of the cars has been interfered with the following morning and Carly and Wade decide to try to find help whilst the rest of the group continue on to the game. Carly and Wade meet a rather odd character who directs them to a nearby town -Ambrose - and tells then they can find help there. It is this town that is home to Trudy's House Of Wax, which leads Carly and Wade to make a grim discovery in their search for someone to help them with their car troubles. What follows is typical horror flick fare - entering premises that have a sign that says "Do Not Enter", delving into unknown territory when all the signs are really saying get the hell out of there and meeting some very strange and foreboding characters and concluding with a fiery finale where the psycho is revealed - in this case a fire which is even more impressive with wax melting all over the place.

Carly and Wade discover the House of Wax is literally made of wax, including the walls, floors, furnishings etc. and are amazed by its realism but take it a step further by exploring beyond the normal reaches in true horror movie style. What they discover is pretty horrific and it challenges them to use all their mental (and sometimes physical) strength to meet the challenges and save their lives. Elisha Cuthbert as Carly and Chad Michael-Murray as Nick play twins who are at odds with each other's lives which allows their characters to have a special bond but it's only Elisha who gives her character some depth with grit and determination.

The infamous Paris Hilton is Paige and actually does a fair job, including her death scene which brought cheers from the preview audience which I attended - now that was predictable. Get a grip guys, your desperation is showing if that one small scene is a defining moment for you.

'House of Wax' is great horror fun with its regulation psycho who had a disturbed childhood, his method of dealing with the traumas of his past and the group of young teenagers innocently stumbling into this horror. What makes 'House of Wax' a step up from the usual schlock is the realism of events and realism of the many wax figures and scenery. Torture scenes, sick behaviour from the resident weirdo, cellars complete with medical instruments that can make your eyes water and a typical spooky soundtrack all combine to make this 'House of Wax' a pliable waxy affair.