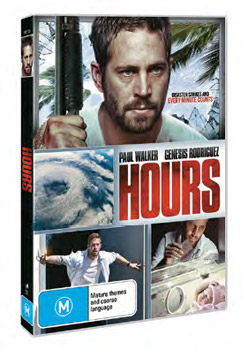 Hours tells the powerful story of a father who is struggling to keep his infant daughter alive after Hurricane Katrina hits. Starring Paul Walker (Fast & Furious) and Genesis Rodriguez.

Before sunrise on August 29, 2005, Nolan Haynes (Paul Walker) arrives at a New Orleans Hospital with this pregnant wife, Abigail (Genesis Rodriguez), who has gone into early labour. What should be one of the happiest days of his life quickly spirals out of control when Hurricane Katrina ravages the hospital, forcing an evacuation.

Nolan and his newborn baby are soon cut off from the world by power outages and rising flood waters. With his baby completely dependent on a ventilator Nolan tackles one life-and-death threat after another, fighting to keep his daughter alive, as minute by agonising minute passes… becoming unimaginable hours.

Her first few hours. His worst.