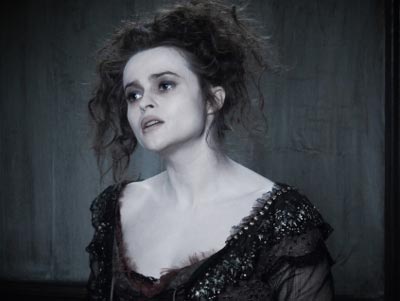 The last time I caught up with Helena Bonham-Carter was she was pregnant the first time. Reminding her of the fact as the very pregnant actress walked into a London hotel room for our interview, the actress laughingly responds "Yeah that's because we shag a lot". But it's her collaboration with the larger-than-life director that has brought out the best in the actress, both personally and professionally, the latest collaboration being on the movie adaptation of the Sondheim classic Sweeney Todd, in which Helena Bonham Carter plays pie-maker Mrs Lovett. "Even though there were some days where it was pretty hellish, on Sweeney Todd, I think he's very good at getting a good performance out of me, even if I don't agree with him all the time." Though Helena Bonham Carter concedes that on a film set, it's Burton who wears the pants. "I usually end up doing what he tells me if he's the director, but at home -"

Helena Bonham Carter first saw Sweeney Todd on stage when she was 13 and has had a hankering to play the part ever since. So it was with gleeful irony that her boyfriend was finally going to film the play. One would think actress Helena Bonham Carter would have been a shoe in to land the role, but no,that's not exactly the case. 'He came to me over dinner once and he said, 'Look, I am gonna do Sweeney Todd' which we both knew we loved, and he also knew that I've always wanted to do. So he said, 'How about this? I think you're right for it, I want you to be considered, because you shouldn't be not considered just because you go out for me. 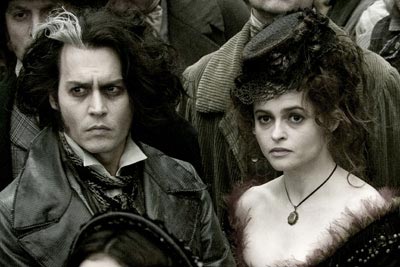 However, you're gonna have to audition along with anybody else who wants to.' He said, 'You know, it's up to you.' And I said, "Of course - of course I'll go for it, because if I don't get the part, at least I'll have learned to sung or had the voice lessons that I've always wanted to do, so I went to a singing teacher." Auditioning for the studio bosses of course paled in comparison to singing in front of Sondheim. "It was scary. I just had no choice, because I so love the part, the material the music and the lyrics, and he's a genius." Ultimately, Helena Bonham Carter scored the part, but getting Burton to confirm this, was pure torture. "I auditioned for Tim on video and he didn't talk about it for five weeks," she recalls, laughingly. "That was tough. Then he auditioned other people, didn't talk about it. It was like the elephant in the room for five weeks-and then finally he said, 'You know what? I think you are right and you can sing this part.' "

She describes the often tragic Mrs Lovett as being "so complex and she could have so many different colors that you could still play it billions of different ways. That's always the exciting thing with a part when it's well-written, in that so many different ideas occur to you." Helena Bonham Carter doesn't see the character as a baddie but "I think they're both victims, in a way. I mean, she's amoral and has no excuses for what she does but she's pretty mad and delusional herself. Her tragedy is that she's in love with somebody who doesn't even notice her." 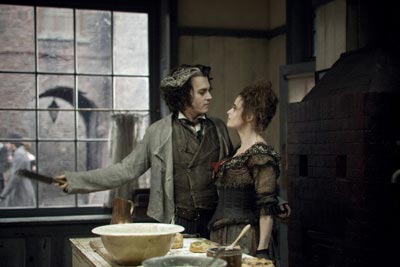 Helena Bonham Carter's career continues to soar as do her maternal duties, admitting that she has learned to balance motherhood with career "now that the number two's coming. I sort of felt I got a bit of balance now, and then I got pregnant again, so it's gonna be difficult the first couple of years." But Helena Bonham Carter has taken to motherhood like a duck to water and is relishing the time she has had with the couple's first child, Billy. "He's fantastic and he's very excited, is a great production, and a genius. It's going to be different when our second child comes out and we've got a doll to practice on. Actually all of us practice on it and he's so solicitous and caring with the doll. I forget it all the time. 'Oh, you forgot Alex.' " As for her next acting gig, she is set to start shooting the latest Harry Potter film in February. "I love the fact that children are a bit scared of me because of that."

With its rivers of blood, this adaptation of the Stephen Sondheim musical isn't for the faint of heart--or stomach. But thanks to the black humor, impeccable production design, and gorgeous music, Tim Burton fans will want to sing after seeing SWEENEY TODD. For his sixth collaboration with the director, Johnny Depp stars as Benjamin Barker aka Sweeney Todd, a barber falsely imprisoned by Judge Turpin (Alan Rickman). After leaving prison, he comes back to Victorian London to find his wife poisoned and his daughter held captive. As he plots his revenge, Sweeney joins forces with Mrs. Lovett (Helena Bonham Carter), and while he preys on clients asking for a shave, his new partner turns the bodies into baked goods. But the judge still lives, and the razor-wielding madman wants his vengeance.