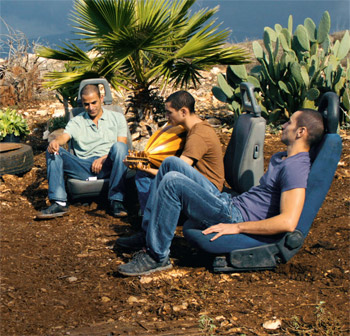 Synopsis: Omar is accustomed to dodging surveillance bullets to cross the separation wall to visit his secret love Nadia. But occupied Palestine knows neither simple love nor clear-cut war. On the other side of the wall, the sensitive young baker Omar becomes a freedom fighter who must face painful choices about life and manhood. When Omar is captured after a deadly act of resistance, he falls into a cat-and-mouse game with the military police. Suspicion and betrayal jeopardize his long-time trust with accomplices and childhood friends Amjad and Tarek, Nadia's militant brother. Omar's feelings quickly become as torn apart as the Palestinian landscape. But it's soon evident that everything he does is for his love of Nadia.

Origin Of The Project

For me, real life oĀen provides the most vibrant material for any storyteller and in the case of Omar this is no exception.ĄWhile in Ramallah several years ago, I was having tea with a good friend who told me the true story of being approached by a government agent with personal information.Ą At that time, the government agent used this secret in
an effort to make my friend collaborate.Ą

Upon hearing this, I immediately knew I had to delve into this subject; to explore how such circumstances and actions would effect love, friendship, and trust.Ą

AĀer some reflection, I found myself unable to sleep one night and in that moment I pulled out a pad of paper and four hours later I had the exact structure
of what Omar is today.Ą

When it comes to filmmaking, reality is not as important as believability and in the case of Omar every scene is both believable and close to reality. It's true, the film has a dramatic structure with coincidences that may appear fictitious, but there is really only one time when the story deviated for dramatic effect.ĄOtherwise I truly believe the whole
movie reflects believability, as it is today, in occupied Palestine.

The Isolation Wall has divided Palestinian cities from themselves ... divided villages, refugee camps, and creates cantons where Palestinians live. In many places it isn-t clear what is and isn-t occupied … for instance in Jerusalem both sides are occupied. My
intention was to create a virtual Palestinian city where the wall is just randomly crossing the city, village and refugee camp with no differences between the two sides.

Jumping over the wall is part of daily life in Palestine. ĄThere are even people whose job it is to help others jump over; these people make a living doing this.ĄYou have to understand that the isolation wall is not being built as a border between Israel and the West Bank, but is actually being built in a way that separates Palestinians from themselves; sometimes it even divides a Palestinian town into two parts.ĄThis is why jumping the wall is a daily occurrence and people do it for a myriad of reasons: work,
family, survival, and love is not an exception.

I have not shot a feature in Palestine since Paradise Now for various reasons. First, I do not always have something to say about Palestine. Inspiration can come from many places. Second, I worked for a while developing a variety of projects and this took all of
my energy at the time.

Shooting Omar took one week in Nablus, six weeks in Nazareth, and one week in Bisan.ĄThere was no opposition to us shooting anywhere; we managed to get permission for all of the places, even the wall.Ą For the wall, we had permission to climb up to a certain height and then, for the moments at the top, we used a fake wall on a set in Nazareth.

Shooting in the West Bank has become easier since there has been a greater presence of Palestinian police authority.Ą With this said, shooting is still difficult and rife with problems, but this is filmmaking everywhere.ĄWhen I started Omar, I wanted to make a film using only Palestinian crew.Ą This meant that some of the heads of departments were doing that job for the first time in their careers and this created some issues with organisation and process. Regardless, we clearly overcame what obstacles there were and everyone is thrilled with the success and the fact that we are premiering the film as part of Un Certain Regard at Cannes. 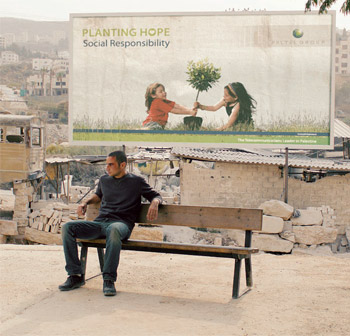 There are only two types of love stories, the tragic and the comedic.ĄIn every love story I know, there will always be two obstacles – the inner obstacle and the outer obstacle.ĄIn most of the tragic love stories, the lovers appear to overcome their outer obstacle but are unable to overcome their inner obstacle, which is the true trust of one another.Ą On the other side, in a romantic comedy, the lovers overcome both obstacles and end up together. Unfortunately, the reality of love is oĀen more tragic than that of a romantic comedy.Ą For my story, Omar actually believes in ideal love and believes in the possibility of a romantic comedy type of ending – this is why the film is doubly tragic.Ą

The main theme of Omar is trust and how it is very important for human relationships but also very volatile.ĄTrust is the core of love, friendship, and loyalty; it is intangible and can be both very strong but also very fragile at the same time.ĄI am interested in exploring the human experience and for that, trust is the fata morgana, it is the superior mirage of the human experience and it is what gives human beings such complex emotions.Ą My desire to unravel the complexities of human emotion is endless and
indestructible.

The four young characters are all played by newcomers and this is their first film.Ą During the casting process, the casting director and I worked tirelessly, searching through many Palestinian actors.ĄWhen we looked at each of them, the most important things were their believability, their ability to express deep emotions and, when in combination with on another, the creation of a dynamic force. Adam Bakri, who played Omar, is a true discovery. He is not only a great actor, but he is unbelievably hard working, stopping at nothing to find the core of Omar-s character and once filmed he leaps off the screen.ĄLeem Loubany, who played Nadja, is a strong force with a sadness in her eyes
that keeps everyone who looks at her intrigued and wanting more. Samer Bisharat, who played Amjad, is the comedian of the group and we incorporated many of the jokes he would tell off screen into his character and into Omar.Ą Eyad Hourani, who played Tarek, showed me a whole new side of Tarek, someone who could be tough and vulnerable, serious and funny, all at the same time, in the same moment. I am very happy with who we finally found and cast and all of them enriched this film tremendously.Ą

Waleed Zuaiter is the only actor amongst the main cast that has had previous experience in front of the camera.ĄWorking with professionals is always interesting and always a challenge because they are the people who ask the toughest questions about their character and their character-s motivations.Ą Working with Waleed was like sculpting in marble, he was strong and tough, but the results were glorious. Ą

The Human Side Of Freedom Fighters

I will never make a film that either solely condemns or defends human beings; I leave that to the courts of justice around the world. The human side of freedom fighters is what intrigues me and, actually, it's the human side of any character that intrigues
me, as often what makes us human is also our tragic flaw.ĄMany people or characters appear perfect on the outside, whether a freedom fighter or a lover, but the tragic flaw of people means that this perfection is only a perception, inside these people
is imperfection and failure.ĄMy job as a filmmaker is to be intrigued by this phenomenon and also to show it in the most honest way, a way that is grey, not black and white.

Giving Voice To The Palestinian Case

My focus as a filmmaker is to make interesting and powerful films and my work is an exploration of what makes great stories.ĄFor me, great films include characters with specific details whose motivations are both timeless and placeless. If my work happens
to create something that effects peoples- understanding of anything, this is a side issue.
It has never been difficult to defend my artistic choices, as every artist in the world must do this; I am not exceptional in this way.ĄAt the same time, exploring the human side behind characters that act violently is also not exceptional and is what keeps most storytellers busy. More than anything else, I find that I am praised and/or criticized for giving a voice to the Palestinian case, but this is not artistic commentary nor criticism. It is political commentary and criticism, which is wholly different.