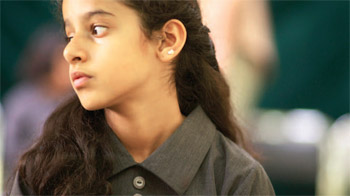 Synopsis: Wadja is a 10-year-old girl living in a suburb of Riyadh, the capital of Saudi Arabia. Although she lives in a conservative world, Wadjda is fun loving, entrepreneurial and always pushing the boundaries of what she can get away with. After a fight with her friend Abdullah, a neighborhood boy she shouldn't be playing with, Wadjda sees a beautiful green bicycle for sale. She wants the bicycle desperately so that she can beat Abdullah in a race. But Wadjda's mother won't allow it, fearing repercussions from a society that sees bicycles as dangerous to a girl's virtue. So Wadjda decides to try and raise the money herself.

At first, Wadjda's mother is too preoccupied with convincing her husband not to take a second wife to realise what's going on. And soon enough Wadjda's plans are thwarted when she is caught running various schemes at school. Just as she is losing hope of raising enough money, she hears of a cash prize for a Koran recitation competition at her school. She devotes herself to the memorisation and recitation of Koranic verses, and her teachers begin to see Wadjda as a model pious girl. The competition isn-t going to be easy, especially for a troublemaker like Wadjda, but she refuses to give in. She is determined to continue fighting for her dreams... 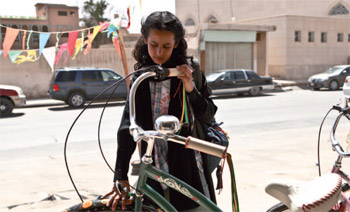 Question: You chose to approach a complex theme like the situation of women in Saudi Arabia through the seemingly simple story of a girl who wants a bike. Why?

Haifaa Al Mansour: I wanted to give the intellectual debate a human face - a story that people can relate to and understand. The film does not present a big story but a small one, a story about the emotions of a few main characters, a young girl and her mother, the lives of these characters within their society. I don-t think people want to sit through a film and be lectured to as much as go on a journey that is inspiring and touching. As simple as the story may seem, I think that more complex themes are woven into it. It was important to me that the story was an accurate portrayal of the situation of women in Saudi Arabia, and that the characters were believable as ordinary people who have to manoeuver through the system the only way they know how.


Question: There are several strong female characters - Wadjda herself, her mother, the school principal… Is Wadjda a women-s film?

Haifaa Al Mansour: Maybe it is a women-s film! But I really didn-t intend it that way. I wanted to make a film about things I know and experienced. A story that spoke to my experiences, but also to average Saudis. It was important for me that the male characters in the film were not portrayed just as simple stereotypes or villains. Both the men and the women in the film are in the same boat, both pressured by the system to act and behave in certain ways, and then forced to deal with the system's consequences for whatever action they take. I do really like the scenes of the mother and the daughter together, and I think that a lot of love and emotion comes through in their relationship, when they are cooking or singing together, there is something very beautiful about it.


Question: Is the character of Wadjda inspired by your own childhood, are there any autobiographical elements to this story?

Haifaa Al Mansour: Well, I come from a very supportive and liberal family. I remember when I was a kid my father took me along with my brothers to get bicycles and I chose a green one. I am extremely lucky to have a father who wanted me to feel dignified as a woman, but it was definitely a different story for my classmates and friends who would have never even dreamed of asking for a bicycle. But I think the heart of the story is something anyone can relate to, which is the idea of being labeled different or deviant for wanting something outside of what is traditionally considered acceptable. The Saudi culture can be especially brutal and unforgiving to people who fall out of step with the society, so there is a real fear of being labeled an outcast. So in some ways, the story is part of my life and the things I encountered in my life. A lot of my experiences, along with those of my friends and family, are reflected in the film in some way – they didn't just come from a concept in my mind. 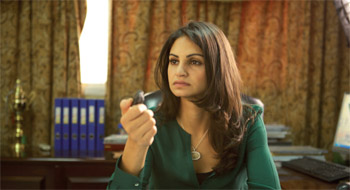 Question: Growing up in a country with no movie theaters, how did you discover cinema and decide to pursue it as a mode of expression and a career path?

Haifaa Al Mansour: I grew up in a small town in Saudi Arabia. I don't want to make it sound like we were totally isolated from the outside world, but we weren't exactly jet-setting around either. Although my parents were well traveled, we only took a few regional trips while I was growing up. All of my young life was centered around our town. The concept of the big world ended at the cities a few hours away. The world beyond that seemed very far away and out of reach. I always read books and watched films and wanted to be a part of the bigger world somehow. Saudi Arabia is a country without movie theaters and bans cinema, but my father made film accessible to us and we had family nights where we would all watch films together. I loved films so much, but I never thought I would be a filmmaker, let alone the first female filmmaker in Saudi Arabia.


Question: How did you cast your actors?

Haifaa Al Mansour: In a place as conservative as Saudi Arabia it is hard to find women and young girls who are willing to appear on camera and in public. That obstacle was only compounded by the fact that we don-t have a local film industry or infrastructure to support the process. Open casting calls for example do not exist, so it took a while to figure out how to go about it. Waad came to one of the sessions we set up in Riyadh and I could see that she already had the look and attitude for the part. All the girls that we had seen before her did not have the spirit that was needed; they were either too sweet or not cheeky enough. And suddenly Waad appeared, with her headphones on her head, wearing jeans and with tattoos on her hands. I was also looking for a girl that has a nice voice to be able to sing with her mother, memorize and chant the Koran, so a good voice was a necessary requirement, and Waad has a very beautiful and sweet voice. I had seen a lot of Reem Abdulla-s work in television so I always thought she would be a good fit for the mother-s role. She did a great job of adjusting from TV to film acting, and I think she turned in a powerful performance. 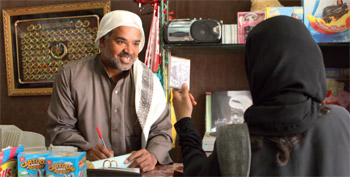 Question: What was it like for you as woman to direct a movie in Riyadh?

Haifaa Al Mansour: Challenging and extremely rewarding at the same time. Every step was difficult and it was quite an adventure. I occasionally had to run and hide in the production van in some of the more conservative areas where people would have disapproved of a woman director mixing professionally with all the men on set. Sometimes I tried to direct via walkie-talkie from the van, but I always got frustrated and came out to do it in person. We had a few instances of people voicing their displeasure with what we were doing, but nothing too disruptive. We had all of the proper permits and permissions so overall it went relatively smoothly.


Question: How are you perceived in Saudi Arabia and the Arab world? Are you considered an exception? A pariah? A pioneer?

Haifaa Al Mansour: I guess I can sometimes be viewed as a polarizing figure, as some people think the idea of a woman making films or working is media is controversial. But it is definitely not my intention to offend anyone. I don't believe in stirring up trouble for its own sake, I just think we should be working to figure out how to incorporate inevitable change and modernization into our culture in a reasonable way. Of course death threats and the like can be scary, but we can't let extremists affect the work we do and the goals we have to develop our country.

I hope I have made a film that is close to the lives of Saudi women and inspires and strengthens them to challenge the very complicated social and political encumbrances they are surrounded by. Although it is hard to deconstruct the deeply rooted traditions that deny women a dignified existence, especially since they are mixed with narrow interpretations of religion, it is a purpose that is worth striving for. 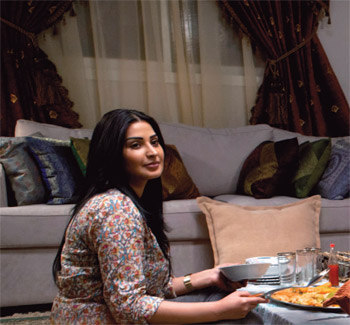 Question: What is the current situation for Saudi women who have creative or artistic aspirations?

Haifaa Al Mansour: I am so impressed with all of the young women I meet in Saudi Arabia now and know that they are growing up in a different era than I did, with so many more opportunities. I want to help provide a platform for their unheard voices and help them tell their stories to the world. It is so hard for women to be themselves. If they act outside of accepted norms they are considered 'controversial" anywhere in the world, let alone in a conservative and a very socially strict place like Saudi Arabia. Women are always expected to be a certain way and whenever they break away from that, they are usually labeled and stigmatised. I hope my films will help some of them find the courage to take risks and talk about the issues that are important to them.