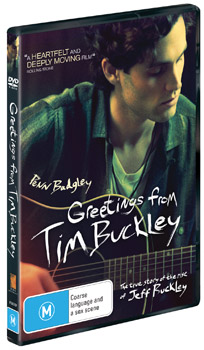 In 1991 Jeff Buckley, an unknown twenty four year-old L.A. musician, is invited to participate in a tribute concert in New York City for his late father Tim Buckley, the iconic folk rock star, whom Jeff never knew. In the days leading up to the concert, Jeff grapples with his own self-doubts and the legacy of his famous father. But with the loving help of an enigmatic young woman working at the concert, he finds the courage to perform at the now legendary St. Ann's concert, where Jeff discovers his own voice singing his father's songs, captivating the audience and launching Jeff's own meteoric career. Simultaneously told in 1991 and 1966, Greetings From Tim Buckley poignantly explores the interweaving paths of a father and son who were among the most beloved singer-songwriters of their generations.