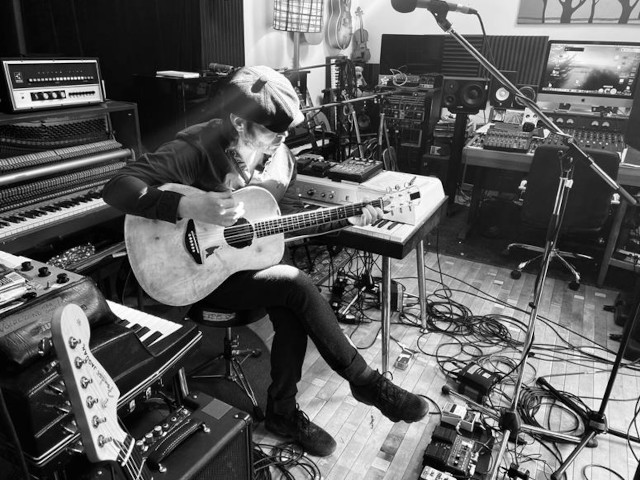 Gaz Coombes returns with his new single 'Sonny The Strong'. Sharing a glimpse into his recent studio sessions, the semi-fictionalised story of a British boxer in post-World War 2 Britain sees Coombes song writing style develop into a new, accomplished and emotionally engaging arena.

Gaz says 'This track was always going to have a biographical story arc to it. For me it was just a case of finding the inspiration. I developed an interest in forgotten heroes and human stories of struggle, those who triumphed over adversity. Also, the idea of someone being drafted into war while at the top of their game and how insane that would've been to deal with and process.

I came across the story of 'forgotten' British world championship boxer, Randy Turpin who, in his heyday, fought and defeated the great Sugar Ray Robinson. That was some life, incredibly tough beginnings, success, fame, crime, apparent dealings with the mob and a tragic end. A fascinating rise & fall story.

Randy became the seed of the story about my character 'Sonny The Strong' and it just evolved from there.'

Taking inspiration from the legend of 'The Leamington Licker' Randolph Turpin's extraordinary, turbulent life, Coombes masterfully weaves a modern-day folk tale with the classic song writing skills he has long been known for. The song sees Coombes continue his development as one the UK's most accomplished and diverse songwriters, as he tells the imagined story of a tormented and ultimately doomed boxer subscripted to fight for his country. Today marks Randy Turpin's birthday – he would have been 94.

Building on a haunting piano, sparse, reverb-drenched guitars, and a hypnotic lo-fi beat, 'Sonny The Strong' sees Coombes continue his trademark sonic experimentation and knack for hooky melodies with a nod to classic Neil Young-esque Americana and German innovators CAN.

Following a critically revered and rapturously received stint back fronting his seminal group Supergrass, April 2022 saw Gaz return to his main job as a solo artist for a short run of underplay shows, including a packed Lexington show in North London. The shows gave fans a chance to hear Gaz road test new solo material including an adoringly received 'Sonny The Strong', alongside songs from his acclaimed solo records.

'Sonny The Strong' was written and performed by Gaz in his Oxfordshire Studio, with additional instrumentation from Garo Nahoulakian, Nick Fowler and Piney Gir. Gaz produced the track with long term collaborator Ian Davenport, who he worked alongside on Mercury Prize and Ivor Novello Award shortlisted 2015 album 'Matador' and 2018's critically acclaimed follow-up 'World's Strongest Man'.