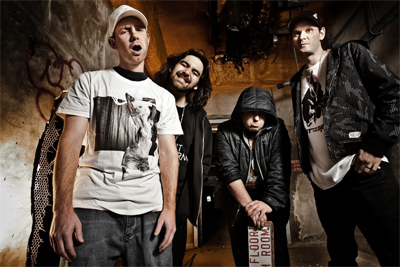 They're back! After going to ground 12 months ago, The Funkoars have resurfaced to deliver "Where I Am" the first single from their fourth LP "The Quickening" through Golden Era Records. Featuring filthy guitars, stomping drums and a bastard of a bass line, "Where I Am" brings back what's been missing from Australian Hip-Hop - The Evil.

From headlining a string of sold out shows to smashing the festival circuit, the 'OARS' - MC's Trials, Sesta & Hons with DJ Reflux on turntable and dangerous stunt duties - have proven without a shadow of a doubt that they are one of Australia's best.

Known for having the rowdiest shows and heaviest beats in the business, The Funkoars deliver clever and often satirical lyrics complimented by the world-class cuts executed by DJ Reflux.

Seven years, Three Albums and a lot of damage later, The Funkoars, have developed one of the biggest cult followings in the country.

With the formalities out of the way, we are proud to announce The Funkoars have signed a monumental deal with Golden Era Records (founded by the legendary Hilltop Hoods) and are currently buried deep in the studio putting the finishing touches on their fourth album "The Quickening" due out September 16th.