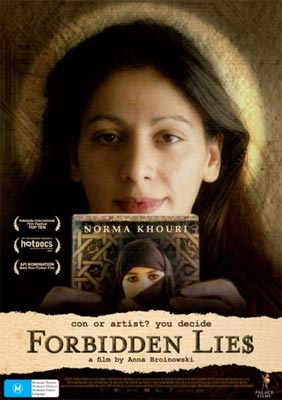 WHO DO YOU BELIEVE?

The journalist? The Chicago mobster? The murdered friend? The FBI?The violent husband? The extorted granny? The spurned lover? The outraged publisher? The embittered fan? The detective? The Muslim activist? The estranged father? The psychiatrist? The media? Yourself?

How often do you get inside the mind of a con woman - "one of the best ever", according to the Chicago cop desperate to track her down? Norma Khouri is a thief, a saint, a seductress and a sociopath - depending on who's talking. Men want to marry her, Islamic extremists want to kill her and the global publishing industry wishes she'd just disappear. Those she duped with her best-selling 'true story' about the honour killing of her best friend Dalia in Jordan, Forbidden Love, number 500,000 readers, publishers and journalists in 15 countries. But her victims don't end there.

When Norma's book was exposed as a fake by Australian journalist Malcolm Knox in July 2004, the world learned that Norma was not, as she'd claimed on Western chatshows, a Jordanian Catholic virgin on-the-run from bloodthirsty Muslim patriarchs who'd placed a fatwah on her head for her outspoken campaign against honour crimes in the Middle East, but 34 year old Norma Bagain a.k.a. Touliopoulos, a married Chicago real-estate agent and mother of two, under investigation since 1999 by the FBI for one million dollars' of fraud.

Knox's scoop rocked the literary world and prompted the FBI to reopen their files on Norma. Norma took a lie detector test in self defence, sued Knox for defamation, dumped her kids with ex-heroin addict and 'tart-with-a-heart of gold' Rachel Richardson in Bribie Island Queensland, and fled to the U.S.A with $350,000 in advances still owing to her outraged Publishers. She's been in hiding ever since. And now she wants to talk.

Weaving between the literary salons of London, the mosque-lined vistas of Jordan, the beachside suburbs of Queensland and the seamy Chicago backstreets of Norma's dubious past, FORBIDDEN LIES pits Norma's tale against the stories of those she conned. There's Mary Baravikas, who died in an underfunded Chicago hospital after Norma alledgedly cashed in her life savings and stole her house. There's Rachel Richardson, $15,000 poorer thanks to Norma, who still swears her friend is a "sweet person who'd bake pies for everyone in the street - she's just got dark secrets only she can answer". And there's Norma's estranged husband with alledged ties to the Chicago mob, John Toliopoulos, whom Norma claims forced her to commit her crimes at gunpoint.

Meanwhile, Forbidden Love has just been released in the Arab world as fiction, Middle Eastern women continue to be murdered by male relatives in 'crimes of honour' with apparent impunity, and Human Rights Groups have yet to receive a cent of the royalties Norma Khouri promised them.

Jordanian honour crimes activist Rana Husseini, furious at the damage that Norma's "fake book" has done to her cause, is demanding to know why the 73 factual errors in Forbidden Love slipped past publishing giants Simon & Schuster, Random House and Transworld just

before the Iraq invasion, when racist potboilers about evil Muslim men with mysteriously veiled women on the covers were selling like hotcakes. So who was really cashing in? Who is to blame? And does it matter that Norma lied?

FORBIDDEN LIES lets you be the judge. As we follow Norma to Jordan to meet with people she says will "prove that Dalia existed, that she was murdered, and that the media has lied", we also investigate Norma's criminal past. Will the FBI arrest her? Is her passion to stop honour crimes genuine, or just a new con? Who do you believe, as you watch Norma's web of stories spinning ever faster, ensnaring everyone, including the filmmaker? Is she a calculating sociopath, a damaged soul craving the limelight, a genuine martyr, or simply a monster of our age, who states that "if Bush and Blair can spin the truth about WMDs to justify bombing innocent people then why can't I spin Dalia's story to save women from being murdered on a daily basis?"

In a spin-driven era, as the lines between truth and fiction grow increasingly blurred, FORBIDDEN LIES is a real-life thriller for our time. Weaving murder, deceit, greed, the East/West clash and an international literary scandal into a web that entangles us all, Norma Khouri's real-life drama is even stranger than her fiction. We all love watching a successful con story - the more dangerous the better.

But this time, it's for real.