Dine Smart This Christmas and Change a Life 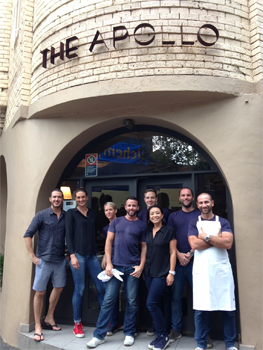 Dine Smart This Christmas and Change a Life

StreetSmart Australia and its restaurant partners are calling on Australians to make a difference this Christmas by supporting the upcoming DineSmart campaign which launches Monday 10 November 2014 across the country. Now in its twelfth year, the campaign's simple formula makes it easy for anyone to get involved and raise much-needed funds for local grassroots charities supporting homelessness.

DineSmart is run by restaurants Australia-wide that ask patrons to add a small $2 donation to their bill. The initiative has raised over $2.4 million since it started in 2003, where the money collected is donated directly to support homeless refuges and charities selected based on their need and proximity to participating restaurants.

People living on the streets can find life tougher than ever during the holiday period - when DineSmart occurs (10 November until 31 December 2014). StreetSmart's grants, including those from DineSmart, support a diverse range of projects including food, shelter, and funding for the -hard to reach' projects that have limited resources to fundraise themselves. Critical services and emergency aid are also supported, as well as projects that promote social inclusion, empowerment and sustainable change for homeless people.

StreetSmart Australia CEO Adam Robinson encourages diners to make the most of Christmas celebrations and support their neighbourhood charities in the process: 'Dining out is a popular social activity, especially during the silly season, and DineSmart is a small but effective way to help those in need," Robinson said.

'Everyone can take part in DineSmart and make a valuable contribution - from simply organising your annual work Christmas party at a StreetSmart restaurant, to booking a table with a group of friends," Robinson added.

Last year's DineSmart campaign raised $445,921 and funded 119 grassroots projects that are delivering emergency aid, as well as longer term programs helping to move people out of homelessness. Robinson attributes the success to the simplicity of the concept: 'The amount generated every year is remarkable, given that the campaign only runs for six weeks. We've found that diners are proud to be part of this grassroots movement; adding $2 or more onto a meal they have already enjoyed and helping to support the homeless on their doorstep".

StreetSmart's cafe counterpart fundraising initiative CafeSmart, which ran on 8 August 2014 raised a staggering $120,263 this year, up from $83,950 in 2013. Yelo from Western Australia was the national fundraising champion.

One hundred percent of funds raised by participating restaurants go towards homeless organisations. Uniquely, all administrative costs to run StreetSmart are covered through sponsorship and volunteer efforts.