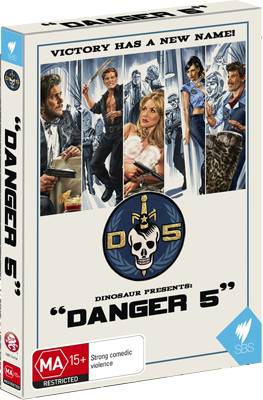 Set in a bizarre, 1960's inspired version of World War II, action comedy series Danger 5 follows a team of five spies on a mission to kill Adolf Hitler. Danger 5 is the finest group of special operatives the Allies have to offer; Jackson from the USA, Tucker from Australia, Ilsa from Russia, Claire from Britain and Pierre from Europe. In each episode Danger 5 unravels another of Hitler's diabolical schemes as they travel across a myriad of exotic locations. The action and offbeat humour is relentless as Danger 5 mounts a series of thrilling missions which include discovering Josef Mengele's perverted Antarctic death circus, busting down Erwin Rommel's golden murder casino and posing as exotic dancers in an attempt to take out Hitler at his own birthday party.