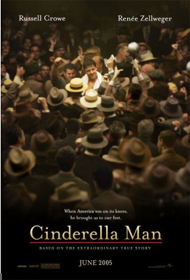 One Man's Extraordinary Fight To Save The Family He Loved.

Synopsis:
In the middle of the Great Depression, when an America in the grips of a devastating economic downturn was nearly brought to its knees, there came along a most unlikely hero who had crowds cheering on their feet-as he proved just how hard a man would fight to win a second chance for his family and himself.

That common-man hero was James J. Braddock-a.k.a. the "Cinderella Man"-who was to become one of the most surprising and inspirational sports legends in history. By the early 1930s, the impoverished ex-prize fighter was seemingly as broken-down, beaten-up and out-of-luck as much of the rest of the American populace. Like so many others, Braddock had hit rock bottom. His career appeared to be finished, he was unable to pay the bills, the only thing that really mattered to him-his family-was in danger, and he was even forced to go on Public Relief. But deep inside, Jim Braddock never relinquished his determination. Driven by love, honour and an incredible dose of grit, he willed an impossible dream to come true.

My Verdict:
When lead-actor Russell Crowe and director Ron Howard worked together on the award winning 'A Beautiful Mind' (2002), a team was created that proved successful enough to go for another shot at creating an intelligent, compelling and dramatic story. That tale is the true story of the 1930's Depression Era boxer James J. Braddock who became known as the Cinderella Man.

Russell Crowe yet again confirms his award-winning status and his ability to wholeheartedly take on a role as he conveys so convincingly the spirit behind the poverty-stricken pugilist James J. Braddock. Crowe takes on the character of the battler Braddock, showing the emotional struggle of a man who remained steadfastly loyal and loving to his wife and children and in doing so, inspired a nation where hope for the future was severely absent.

The talented Paul Giamatti brilliantly plays Braddocks manager, Joe Gould, his face often telling the story alone and Renée Zellweger is the lovingly tough Mae Braddock, whose fierce loyalty to her husband James was a key element to his boxing career.

After a run of misfortune, Braddock, through a turnaround series of fortunate events, gets a shot to go for a world heavyweight boxing title against the arrogant and smug heavyweight champion Max Baer (Craig Bierko). It is this title fight that concludes the film in a clash that had thousands pack the Madison Square Garden, and literally thousands more listening to the fight on the radio. This scene is one of those ultimate climaxes where it really is hard not to become involved and you can't help but be moved by the action.

Although some of the characters are fictional, 'Cinderella Man' is essentially an authentic recreation of events and certainly looks it. The attention to detail is far reaching, including a scene of "Hooverville" - a shantytown comprised of cardboard "houses" where the poorest of the poor struggled to survive. Time and time again this attention to detail is evident including the Braddocks' home, the furnishings, the costumes and even the conversations amongst the characters being indicative of tough times.

Most people love a story about an underdog achieving greatness against the odds and 'Cinderella Man' is certainly one of those. This is one fight worth seeing.