Christmas With The Kranks 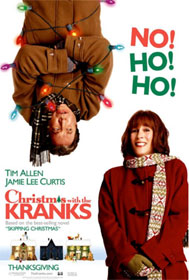 No! Ho! Ho!
Synopsis:
In Revolution Studio's new comedy 'Christmas With The Kranks', based on John Grishams best-selling novel "Skipping Christmas", Tim Allen plays Luther Krank, a man who decides to skip Christmas and all the surrounding trappings and go on a vacation with wife Nora (Jamie Lee Curtis) instead.

But when his daughter decides, at the last minute, to come home for the holidays, he is forced to put Christmas back together.

My Verdict:
'Christmas With The Kranks' is a pretty average comedy about a very American family -The Kranks -who decide to skip Christmas after their only child, a daughter Blair (Julie Gonzalo), heads of to South America to volunteer for the Peace Corps. Her situation changes and on Christmas Eve she phones home to say that she'll be home for Christmas. Then panic sets in because Luther and Nora Krank, Blair's parents, had decided to skip Christmas and use the money they would have spent to go on a cruise instead. And that's basically all there is to this simple story, the rest is just padding.

The movie is essentially a two-act play, with the first half spent watching Luther and Nora convince all their friends and acquaintances that they are happy not to have a Christmas with all the trimmings. The street they live in is traditionally a very community spirited place, where all the houses are decorated to the hilt, complete with an illuminated Frosty The Snowman on top of the house and The Kranks have really let the side down with their undecorated abode. This situation allows for some run of the mill comedy situations as the neighbours try to persuade the Kranks to enter into the festive season, with Dan Aykroyd as pushy street overseer Vic Frohmeyer.

The second act of the movie is after Blair phones to say her arrival is imminent and the Kranks go into action overload as they try to resurrect the Christmas they usually have. This is probably the funniest section and includes scenes such as Nora tracking down a Hickory Honey Ham, Blair's favourite, in the supermarket only to have it destroyed on the highway. Eventually, after some chaotic scenes, Blair arrives home and it's a case of she'll never know.

'Christmas With The Kranks' is a standard Christmas holiday family movie that is a safe movie for all the family to enjoy. It is not a laugh a minute caper, but does have some very funny moments amongst the eventual true spirit of Christmas ending.