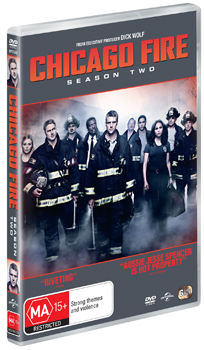 Chicago Fire Season 2 returns with a riveting look into the everyday heroics and the private lives of the fire-fighters, rescue squad and paramedics of Firehouse 51, where plunging into roaring infernos and putting out personal emergencies is just another day on the job. Featuring an all-star cast including Australia's Jesse Spencer (House M.D, Neighbours), Taylor Kinney (Vampire Diaries, Zero Dark Thirty) and Yuri Sardarov (Argo, The Ides of March).

For the fire-fighters, rescue squad and paramedics of Chicago Firehouse 51, no occupation is more stressful or dangerous, yet so rewarding and exhilarating. These courageous men and women are the elite who forge headfirst into danger when everyone else is running the other way and whose actions create the difference between life and death. But in Season 2, there are more than just flames to battle when the station lands on the short list for a shutdown, sending the team on a rescue mission they're not equipped to handle.

Created by Emmy® Award-winning executive producer Dick Wolf (Law & Order, Miami Vice), this smoking hot series has also been renewed for an exciting 3rd season. Viewers can experience all 22 episodes of season 2 back-to-back and uninterrupted and feel the heat with the smouldering cast of Chicago Fire.