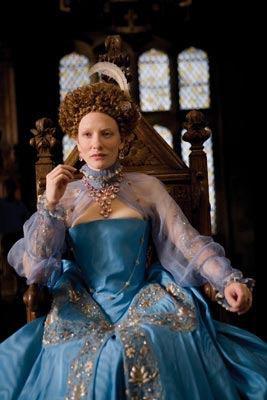 Elegantly poised, Australian Oscar winner Cate Blanchett would rather be anywhere but a Beverly Hills hotel holding court with the press. "Maybe we can forget the whole thing and just go home", she says, half smilingly. In town to promote her starring role in the new Elizabeth epic, The Golden Age, Cate Blanchett is fresh off from her surprising win as Best Actress at the recent Venice Film Festival playing a version of Bob Dylan in I'm Not There. "It was cool, wasn't it?" she questions, laughingly. "I was very surprised and pleased." It seems it's her year playing iconic characters, from Elizabeth 1 to Bob Dylan, with the latter epitomizing the risks that Cate Blanchett continues to take as an actress. "I think I run a hundred miles an hour away from projects every single time, and in the end, the ones that stick are the ones that sort of pursue you and you can't say no to," explains Cate Blanchett. "The idea of playing Bob Dylan was just so utterly ludicrous that of course I had to say yes and it was very daunting."

But it's her return to her role of Elizabeth, the historical character that led to a first Oscar nomination and international stardom, that the actress is keen to talk about, admitting that agreeing to reprise the part was not an easy decision to make. "I was a bit nervous about returning to a character that had allowed me to walk into a door to an international film career. You don't ever want to feel like you're going backwards, so once I perceived that I could actually progress forwards through playing it, then it became exciting to me." 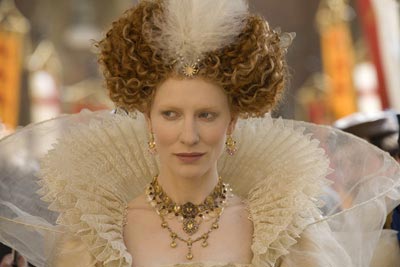 The Golden Age explores Elizabeth's grip on power, as Spain's Phillip II, Mary Queen of Scots and her feelings for Walter Raleigh, during a defining epoch in the monarch's reign, threaten her. Cate Blanchett, who resisted doing the film for quite some time, finally relented, she says, "because of time. The minute we finished the first one, Shekhar [Kapur] was talking not only about my playing Elizabeth again, but hundreds of other ideas. We've remained friends and have talked about various projects, and Tim Bevan from Working Title just said, 'Look, let us just work a script up, and if it doesn't work, it doesn't work.' " Cate Blanchett was struck, she recalls, " that the notion of the love triangle, the very structure of the narrative, was quite different, because I had always said that if they did another one, that Elizabeth shouldn't be the central character. Because it's an unabashedly romantic film, was cut differently, it didn't feel like treading the same ground." Nor is Cate Blanchett concerned at the number of Elizabeths have dominated the small screen of late. "There's a long and glorious legacy of actresses who have played Elizabeth I, so she's constantly reinvented, because she's such an enigma. Also, if you think about the Elizabethan age, when the English culture as we know it was crystallized, it's a fascinating period of history, so I think there'll be many more Elizabeths long after this film." 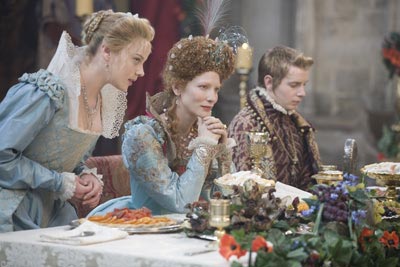 As for the inevitable criticism, that this movie, like its predecessor, takes liberty with historical accuracy, Cate Blanchett aggress that like good drama, this movie is a fusion of fictionalised history, historical fantasy, and the exploration of a legend "In the end, when you only have a couple of hours to tell an incredibly dense period of history, by the process of selection, you're automatically telescoping the events, and saying, 'This event has more significance to the one that's been omitted.' Therefore it's never going to be like reading the letters, court documents, or Alison Weir's biography of Elizabeth, because it's not the same experience. But then, going to see a film shouldn't because you are being told a fable, and one through the eyes of that director." Cate Blanchett argues that her Elizabeth "has a contemporary quality and I think like all good stories, it's able to sort of connect to the current collective unconscious, what we're all thinking about, and what it means to be female now as much as what it means to be female then."

Through her decade plus career, Cate Blanchett has gone out of her way to remain a character actor, rather than an extension of some well defined persona. Cate Blanchett maintains that her job is keeping performances as grounded in reality as possible, no matter how iconic the character. The actress says she achieves this by "hopefully, a rich set of life experiences that I'm able to draw on. But at the same time, I'm not at all interested in playing myself or imposing my own value system onto a character. It's like having conversations continually with like-minded people, in that you get a very skewed perception of the way the world works. So I like having conversations with characters who can convey different ways to me about very different sets of experiences." Cate Blanchett flits effortlessly from the small to the enormous, and her appearance in the new Indiana Jones film extends to the other Hollywood extreme. 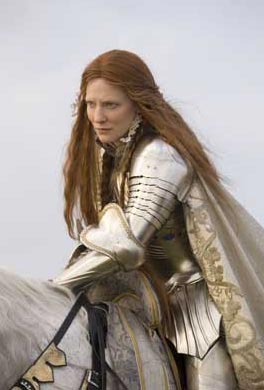 While Cate Blanchett remains tight-lipped about her role in next year's most eagerly anticipated action film, she does smilingly muse on being part of Hollywood history, as the girl from Melbourne, who dreamed of acting, is destined to become a part of Hollywood folklore. ": It's such a well-oiled iconic franchise, and one in which I grew up. On the first day of shooting, it was extremely surreal, as I was watching the monitor as Steven set up the frame, and I knew the iconography of the frame. I knew the trucks, I knew the layout, I knew the way these things were lit, but yet when I was meant to enter the frame, it was a real moment. So it's been fantastic, so much fun and my boys have had an absolute ball."

Cate Blanchett has quite the balancing act: wife, mother and now co-artistic director of the Sydney Theatre Company with her husband, Andrew Upton. "We officially take over as co-artistic directors on the first of January. I mean things have begun. Andrew's been there all year as an artistic associate, and I've been coming and going. Obviously it takes a long time, and there's some deep time projects which we've begun to set up already. We caretake Robyn Nevin's season next year, so officially, we don't actually start until January the 1st."

Cate Blanchett is doing it all, it seems, and is only too much aware of her evolution as an actor since it began for her a decade ago. "We all evolve as humans beings, that's all part of life, isn't it?" 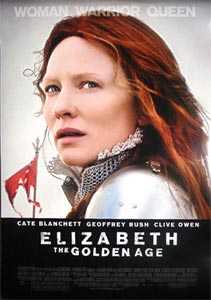 Reprising the roles they originated in seven-time Academy Award®-nominated Elizabeth, Cate Blanchett and Geoffrey Rush return for a gripping historical thriller laced with treachery and romance--The Golden Age. Joining them in the epic is Clive Owen as Sir Walter Raleigh, a dashing seafarer and newfound temptation for Elizabeth.

Preparing to go to war to defend her empire, Elizabeth struggles to balance ancient royal duties with an unexpected vulnerability in her love for Raleigh. But he remains forbidden for a queen who has sworn body and soul to her country. Unable and unwilling to pursue her love, Elizabeth encourages her favorite lady-in-waiting, Bess (Abbie Cornish), to befriend Raleigh to keep him near. But this strategy forces Elizabeth to observe their growing intimacy.

As she charts her course abroad, her trusted advisor, Sir Francis Walsingham (Academy Award® winner Geoffrey Rush), continues his masterful puppetry of Elizabeth's court at home--and her campaign to solidify absolute power. Through an intricate spy network, Walsingham uncovers an assassination plot that could topple the throne. But as he unmasks traitors that may include Elizabeth's own cousin Mary Stuart (Samantha Morton), he unknowingly sets England up for destruction.

Elizabeth: The Golden Age tells the thrilling tale of an era...the story of one woman's crusade to control love, crush enemies and secure her position as a beloved icon of the western world. 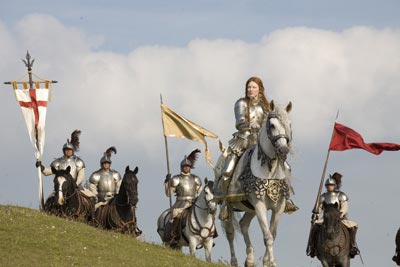 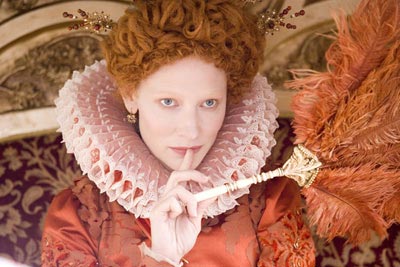