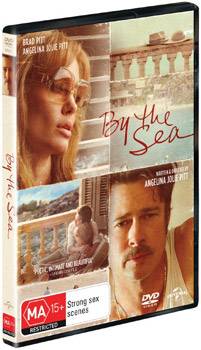 Brad Pitt (Inglourious Bastards, The Big Short) and Angelina Jolie Pitt (Salt, Wanted) share the screen for the fi rst ti me since Mr. and Mrs. Smith (2005) in this sumptuous and sensiti ve portrait of a couple's marital crisis. Writt en, directed and produced by Academy Award®-winner Jolie Pitt , By the Sea is a powerful story of a couple's journey of love, loss and redempti on and is available to own on Blu-ray™, DVD and Digital from June 9, 2016.

Set in the mid 1970's, By The Sea follows American writer Roland (Pitt ) and his wife, Vanessa (Jolie Pitt ), who arrive in a tranquil and picturesque seaside resort in France, their marriage in apparent crisis. Once a couple madly in love with each other, Vanessa and Roland fi nd themselves painfully growing apart. As they spend ti me with fellow travellers, including young newlyweds and village locals, the couple begins to slowly come to terms with unresolved issues in their own lives and their relati onship.

This provocati ve and inti mate tale features an internati onal supporti ng cast including Mélanie Laurent (Inglourious Basterds, Now You See Me), Melvil Poupaud (Laurence Anyways, The Lady in the Portrait), and César Award-winners Niels Arestrup (The Diving Bell and the Butt erfl y, The French Minister) and Richard Bohringer (The Cook, the Thief, His Wife & Her Lover, Le grand chemin). A lavish, emoti onally capti vati ng drama of romance and heartache, By The Sea is available to own on Blu-ray™, DVD and Digital from June 9, 2016.