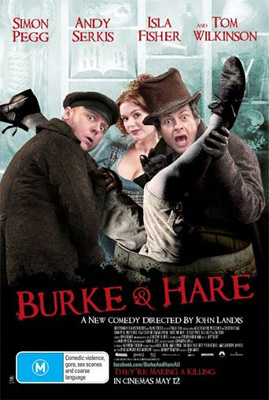 Synopsis: William Burke (Simon Pegg) and William Hare (Andy Serkis) are scratching out a living in 1820s Edinburgh. After yet another failed business venture, they return to Hare's lodging house to find that a tenant has suddenly died on rent day. As the boys decide how to dispose of the body over a drink, they discover that a corpse can fetch a hefty price. Edinburgh is the centre of the medical world and the city's doctors are crying out for cadavers for their anatomical demonstrations. Not least, fierce rivals progressive Dr. Knox (Tom Wilkinson) and traditionalist Dr. Monro (Tim Curry). When Knox is paid a visit by Burke and Hare with a fresh corpse he urges them to bring him any more 'unfortunates' they may stumble upon.

Verdict: Burke and Hare is a black comedy set in Edinburgh, Scotland in the 1800's. Burke (Simon Pegg) and Hare (Andy Serkis) are a couple of grave robbers who sell dead bodies to a medical school for money. When Burke meets a beautiful woman (Isla Fisher) who is planning on using someone to finance her all women version of Macbeth, he is immediately smitten. Burke needs to make more money and there are no more bodies to be found, so he and Hare start killing people themselves.

The costumes and background surroundings were great but that's about all that this movie really has going for it. It seemed like a really long comedy skit that was neither very funny nor interesting. The acting was bad and the story seemed a bit all over the place. It seemed like it went for a lot longer than it actually did.

There were a lot of gruesome bodies and severed limbs throughout the film. Some people find gore and humour together very entertaining but it was fairly off-putting. It was very obvious that it was meant to be funny but it didn't quite make the cut.

The storyline could have been interesting but unfortunately it wasn't. The ending was a disappointment from an already very disappointing movie.
Rating: **
Sarah Masson