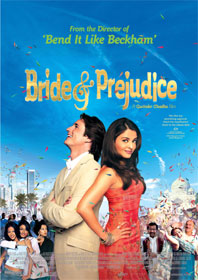 Bollywood meets Hollywood - And It's A Perfect Match

Synopsis:
Jane Austen's "Pride & Prejudice" get the Bollywood treatment in this fusion of East meets West. Austen's classic love story unfolds in a riot of colour and emotion, song and dance that jet sets from rural India to via London to Los Angeles. From the team behind the international hit 'Bend It Like Beckham' (2002) comes a Jane Austen adaptation like never before.

My Verdict:
If you have never tasted Bollywood before, here's your chance to discover a very different version of the Jane Austen classic, "Pride & Prejudice". Being an adaptation and Bollywood film allows for some extensive diversion away from the original without destroying the principle and introducing some original and exciting new themes to the story. In this case, and as is very much a Bollywood standard, there are numerous musical numbers that are interspersed throughout. It sounds implausible to introduce songs to the prim and proper "Pride & Prejudice", but in 'Bride & Prejudice' they seem totally within the normal parameters of production, in keeping within the formula Bollywood narrative structure.

The home of the not so wealthy Bakshi family is in rural Amritsar in the state of Punjab, India, where Lalita, played by the absolutely gorgeous Bollywood superstar Aishwarya Ra, is one of four daughters whose parents (Nadira Babbar & Anupam Kher) are trying to find a suitor for her. Enter the arrival of millionaire Mr Balraj (Naveen Andrews), and his best friend, an American hotel millionaire, William Darcy (Martin Henderson). They have come for a wedding and soon they are involved in a web of romance with Lalita and her sister Jaya (Namrata Shirodkar). Remembering Pride & Prejudice, Lalita (Austen's Lizzie) is destined to find love with Darcy but not before some misunderstandings and another attraction to Wickham (Daniel Gillies) who has a long-standing grudge against Darcy. Added to this is the comic relief of Mr Collins who is known here as Mr Kholi (Nitin Ganatra).

Set mainly in Punjab, Goa and Mumbai, India, there is the opportunity for cultural differences to rear themselves as well as class differences, which 'Bride & Prejudice' utilises so fully and then there is a trip to Los Angeles via London which further adds to this difference. There are many traditionally Bollywood musical songs and dances, which are so trite and corny, but their often-redeeming feature is the blast of colour and lively pace. Sometimes it is hard to understand what is being said, given the Indian accents of most of the cast, which is frustrating and disappointing, and there are some subtitles during some of the song and dance numbers, which are sung in Indian.

'Bride & Prejudice' is obviously very predictable if you already know "Pride & Prejudice", but this movie is one fast and energetic version. It is so very colourful, with some of the most gorgeous, brilliant costumes and traditional Indian sari's that are to die for. The jewellery worn isn't bad either! The acting is rather average but who cares when there is so much else on offer. 'Bride & Prejudice' is sometimes so pedestrian that it ends up being ok in spite of itself.