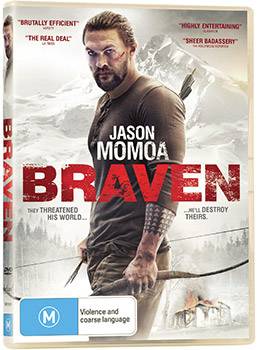 When Joe Braven and his father arrive at their remote hunting cabin, they're hoping for a quiet weekend. What they find is a stash of heroin, hidden in the cabin by drug traffickers. When the criminals suddenly return, Joe and his father must make a kill-or-be-killed stand for survival.

With regards to the casting, writer and producer Michael Nilon says, 'the casting was a group effort, but that Jason really ran point on it." Momoa said: 'The cast is really the best thing about this whole movie. I wasn't going to do it if I didn't have certain people, and of course my dad, Stephen Lang, who we worked on Conan together, is just so instinctual and raw and strong and vulnerable…I had to have him."

Momoa felt the same about Garret Dillahunt and says: 'I just always saw something amazing in him that is so electric. He is just a great actor and I really wanted him to play the bad guy." Regarding Dillahunt, Nilon adds: 'Just in terms of his physicality, his presence and his intelligence, Garret is able to stand toe to toe with Jason and people can see that they're both very formidable presences. We all hope that the audience enjoys the performances of the cast which I think are exceptional. We're hoping that the cat-mouse chase comes through, because if you're along for that ride and you're hooked in that way, the action will be even that much more gripping," says Nilon.
Jason Momoa explained that the production team wanted to make an action movie that was about family, where 'the people watching it care about the family and their heartaches, so it's not just about shooting guns and blowing stuff up." When asked about working with Jason Momoa, Jill Wagner stated: 'Jason is a truly believable action star, but he is also a really emotional actor and I think that is going to come out in this film."

'I would really like to move people. I want them to root for my character and to see all the stuff that he has to go through and overcome, and that it's just his heart, his passion that gets him through" said Momoa.