Synopsis: Princeton grad student Richie (Justin Timberlake), believing he's been swindled, travels to Costa Rica to confront online gambling tycoon Ivan Block (Ben Affleck). Richie is seduced by Block's promise of immense wealth, until he learns the disturbing truth about his benefactor. When the FBI tries to coerce Richie to help bring down Block, Richie faces his biggest gamble ever: attempting to outmaneuver the two forces closing in on him.

Richie is chasing a new version of the American dream: easy, instant and limitless wealth. Once on the Wall Street fast track, Richie lost everything when the market crashed and is now starting over, hustling his way through graduate school. After being cheated by an online gambling site and watching his tuition money disappear, Richie flies to Costa Rica to confront the gambling legend behind the site: Ivan Block.

Block is impressed by Richie's savvy and takes the younger man under his wing, promising to show Richie the ropes. Soon thereafter, Richie falls for Block's associate –sophisticated COO Rebecca Shafran (Gemma Arterton) – and he embraces a world that sees all of his fantasies come to life. But Richie soon learns that Block is wanted for racketeering, extortion and bribery, and that FBI Special Agent Shavers (Anthony Mackie) is obsessed with bringing Block and his associates to justice. Block decides to pull up stakes and leave Richie behind as the fall guy.

With Shavers closing in, Richie must figure out a way to stay a step ahead of Block and Shavers – or risk a future behind bars.

According to the American Gaming Association and leading gambling research firm H2 Gambling Capital, Americans spent $2.6 billion on illegal online gambling websites in 2012. In fact, Americans generate nearly 10 percent of the current $33 billion worldwide online gambling market, despite the fact that the U.S. government is doing everything in its power to crack down on illegal operators.

Illegal gambling websites operate in the shadows. They are not regulated by the United States government and lack consumer protections against cheating, money laundering and underage gambling. And they do little to promote responsible gaming.

It is the Wild West all over again, but instead of guns, these white collar criminals use complex algorithms.

Runner Runner presents a cautionary tale of what can happen when these illegal operators are allowed to dominate the market as they do today. 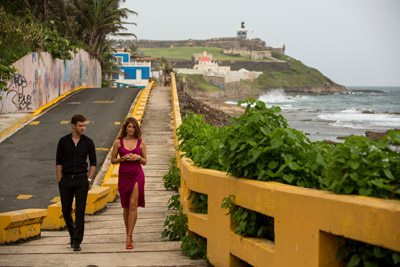 Despite the risks – statistical and criminal – online gambling holds innumerable attractions. In today's post-economic-meltdown world, young people have fewer job options than ever before. But that hasn't done anything to affect their desire to get-rich-quickly. This generation – consumers from early childhood – is used to getting what they want, when they want it, with the click of a mouse. From illegally downloading movies and music to Internet gambling, to supporting groups like Anonymous, this generation believes that the rule of law has no place in the online world. They look to supposed leaders in the business world who take shortcuts that are morally suspect - if not illegal - and ask themselves, "If they can do it, why can't I?"

In this regard, Runner Runner is a cautionary tale about the dangers of easy money and unchecked ambition.

The lavish life of Runner Runner's gambling kingpin Ivan Block is what Runner Runner director Brad Furman calls, 'the new American dream." He elaborates: 'Technology has led us to a world where everything comes very quickly, which has expedited this concept of the American dream. Young people today want everything faster – especially money."

Justin Timberlake concurs with Brad Furman's assessment of the American dream on steroids: 'The American dream used to be about being rich and famous, but now it's to become rich and famous – as quickly as possible. The more access we have to things, the faster we want them. Just touch a button and you can have almost anything shipped to you.

'Today, people don't want to own a Cadillac; they want to invent their own car," Justin Timberlake continues. 'A generation of young people wants to start their own galaxy of entrepreneurial activities. People are constantly trying to reinvent the wheel, and things are moving at warp speed. It's cutthroat. It's very cerebral and less about integrity, pride or honor, or any moral values."

Justin Timberlake's Richie Furst is among those getting caught up in this irresistible but dangerous mindset. His guide and 'benefactor" is Ivan Block. Ivan Block is the man behind the curtain of a billion-dollar online gambling empire. Ben Affleck says the role provided an intriguing change of pace. 'I've done a couple of parts where the characters I play were reserved, quiet and internal, but Ivan is always -gunning the engine.' He's never at a loss for sexy monologues about life, and he enjoys spinning all kind of sophistry to Richie. I thought that Ivan and his world would be a lot of fun to explore."

Like Justin Timberlake, Ben Affleck was intrigued by Runner Runner's depiction of the behind the scenes machinations of the new American dream: 'Underneath this allure of fast and easy money is something inherently fraudulent, crooked, broken and wrong," he explains. 'Everything now is about getting rich quickly, by any means necessary. The new corporate ethos is to cut the other guy's throat. In some circles, it's even considered healthy and to be prized."

Director Brad Furman came to Runner Runner fresh from the success of The Lincoln Lawyer in 2011. 'I had a specific vision for Runner Runner, to create a journey down the rabbit hole for Richie," he notes. 'The movie begins in New Jersey, and then Richie ends up in Costa Rica and a fantastic but corrupt world."

Justin Timberlake describes his character's descent: 'Richie is a good guy in the wrong place, trying to do the right thing. He's constantly trying to hold on to his morals. Richie is a dreamer and an idealist who makes an honest mistake and must figure out how he's going to get out of it."

Ivan Block's own journey down the rabbit hole has yielded untold riches, which is all the enticement Richie needs for what ultimately becomes a rite of passage. 'Ivan Block is the unapologetic mentor who says, -Get what you can get and don't think twice about it,'" says Ben Affleck. 'Block wants to manipulate Richie, to get him to be part of his team. His mission is to groom Richie so he won't object to some of the darker things he sees." 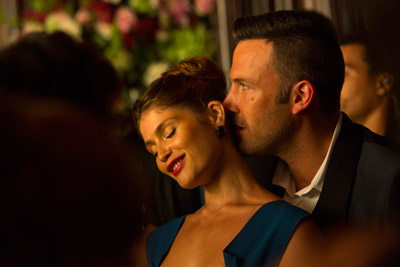 Ben Affleck notes that reading people is one of Block's chief strengths in distracting Richie from the tycoon's less savory aspects: 'Block knows what buttons to press on people, and his most impressive trick is to distract them from his true motives. To Block, people are insecure and almost desperate to succeed. He knows people feel they've been kicked around and that we're taught to chase the dollar and to equate wealth with status, honor, success, and manliness. So he holds up that wealth, which blinds Richie to what's really going on."

But the real allure of Block's world transcends money, says Brad Furman. It's about something far more interesting – and dangerous. 'The real equation in this movie is money times power equals sex. You ask men why they want money and power, and the answer usually is: women. That's the bottom line."

The distaff representative of this world is Rebecca Shafren, Block's sharp and powerful COO, whose loyalty to Block is tested when she meets Richie. English-born Gemma Arterton portrays Rebecca. A gambling novice, Gemma Arterton nevertheless embraced the role. 'I really liked the script, which I thought was clever and witty, and it portrayed a world I wanted to investigate."

'I really like Rebecca," Gemma Arterton continues. 'She's almost villainous in certain ways, and she's never predictable. Runner Runner is about power, wealth and greed. I was intrigued by Rebecca' desire to live in this world, which is indicative of how many women believe they must act – in an almost masculine way – in order to succeed."

'When Richie arrives in Costa Rica and meets Rebecca, she is very much the business person in control; she's very tough, almost like a femme fatale," Gemma Arterton continues. 'But she also enjoys having fun. She sees this sexy, young guy and thinks, -I'll play around with him for a bit.' She finds out that he's actually quite clever and smart, and he's different from other people she knows and works with. Rebecca has a real dilemma: she covets the wealth that comes with her position, and yet also rediscovers her moral bearings through her relationship with Richie. And she begins to change her outlook on Block and her position in his empire."

As the Richie-Ivan-Rebecca dynamic unfolds, a new 'player" emerges, who will impact their lives: FBI Special Agent Shavers (Anthony Mackie), who's placed Block on Shavers' own Ten Most Wanted list. In gambling terms Shavers is the wildcard. He is playing Block, Richie and Rebecca, and he is determined to circumvent international boundaries to put them all in a Federal prison.

Mackie describes how his dedicated if overly ambitious lawman came to relentlessly pursue Block and his cohorts: 'Early on Shavers was just a guy working his way through the ranks. He was trying to make his name by cracking a big case. So he went after Block, but Block kept eluding him because he kept moving further away from Shavers' jurisdiction."

Shavers pursues Block to Costa Rica, where he has limited jurisdiction and room to move: 'Shavers tries to find a way in – someone to give him Block. And he couldn't find that until Richie came along. Shavers understands there was something good in Richie that he could use to take down Block."

The Costa Rica of Runner Runner exists at the intersection of opulence and poverty, and of regulation and corruption. It's where you can indulge any whim without consequence – until those desires grow too large. From glitzy casinos and bikini-dotted swimming pools to sweaty, crocodile-infested jungles, Runner Runner depicts an enticing, dangerous world where all the seven deadly sins are in play.

The story is fundamentally about wealth – the desire to have it and the impulse to protect it. That ethos is reflected in the look of the characters – slick and composed but tempered by the relaxing breeze of Costa Rica. Think: finely tailored suits, linens, and body conscious styling.

For Runner Runner, the American Commonwealth of Puerto Rico doubled for Costa Rica. The production was in Puerto Rico for the entire summer of 2012. Much of the filming took place in La Perla, an oceanfront area squeezed into 650 yards between the northern historic city wall of San Juan and the Atlantic Ocean. The production design team was challenged to create a realistically lavish world in a country where there is a wide divide between rich and poor:

The most extravagant of these settings is Ivan Block's palatial estate, whose main house Affleck describes as 'a big white monster with a Scarface-y vibe; it's appropriate for the character. What does it look like when a guy makes all this money? Take an 18-year-old's mindset and give him $20 million in cash, and you end up with a giant party house and a lot of girls with tight clothes and a lot of alcohol, a lot of gambling and having a party every single night. That's the world we see when we step into Block's life." 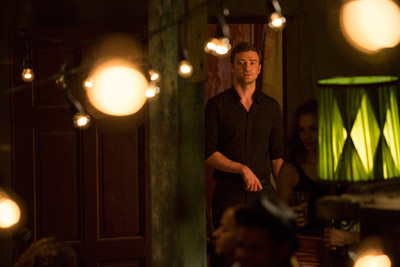 "Runner Runner." It's an expression unknown to all but perhaps the most ardent gamblers. For the uninitiated, here's a quick explanation: In the game of poker Texas hold -em, each player is dealt two 'hole cards," which they keep to themselves. Then three cards are dealt face up – also known as The Flop. The fourth card dealt up is The Turn and the fifth card is The River. Sometimes a player will get the two cards he needs on The Turn and The River – a very lucky break that is also known as 'runner runner."