Cows to the Rescue 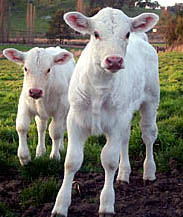 Your plate of beef offal may soon give you more than just a decent dose of red meat. It may, legally, contain enough resistant bacteria to undermine life-saving antibiotic treatment.

The nation's health ministers are scheduled to consider today allowing beef offal for human consumption to contain a residue of one modern antibiotic at levels near those used to treat human ailments.

Early last year the health ministers refused to approve the presence of the same group of powerful cephalosporin antibiotics, because of uncertainty about the dangers for humans.

The antibiotics are currently approved for use in cattle, but officials from the Australia New Zealand Food Authority and the National Registration Authority for Agricultural and Veterinary Chemicals said use was permitted on condition that doses were withheld long enough before slaughter to prevent residues remaining in the meat.

On the basis of a Commonwealth advisory committee report, ANZFA wants to change this, arguing that low levels of residue are an acceptable risk.

According to one official source, it is possible that a majority of ministers, including NSW's Mr Knowles, will allow cephalosporin residue levels in beef because the chemical is now approved for cattle.

The ACT Health Minister, Mr Michael Moore, said last night he could not support the approval of the residue levels when there remained evidence they might lead to human antibiotic resistance.

Cephalosporins are among the diminishing range of antibiotics whose therapeutic effect has not been significantly reduced by antibiotic resistance.

According to an expert on antibiotic resistance, Associate Professor Peter Collignon, of Sydney University's clinical school in Canberra, the residue is just an indicator or fingerprint of antibiotic use. "The more important issue is that antibiotic-resistant bacteria the drug helped create in the animal do pass undetected into people."

Cephalosporins are an essential treatment for many life-threatening infections in humans, including meningitis and pneumonia. "If those resistant bacteria are in people when they get sick, the antibiotics won't work."

One health source said the issue demonstrated the continuing tussle between health and agriculture over food safety regulation, with the antibiotic resistance question being "played down because of concerns about the impact on industry".

The proposal before the ministers today would permit up to 2mg per kilogram of residue of a new cephalosporin product, ceftiofur, in beef offal and 0.1mg in beef and milk. Professor Collignon says that while the 2mg level would not have a therapeutic affect, it would be enough to alter human bacteria and could also induce allergies in susceptible people.

This article first appeared in the Sydney Morning Herald on 31st July 2001 and has been reproduced with thanks to http://www.animal-lib.org.au