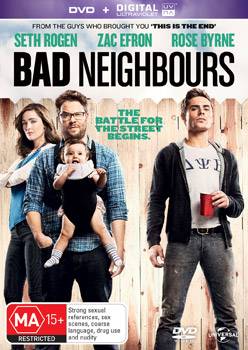 Hollywood heartthrob Zac Efron (Are We Officially Dating?, The Lucky One) and actor Dave Franco (21 Jump Street, Now You See Me) star opposite Golden Globe® nominee Rose Byrne (Best Performance by an Actress in a Supporting Role in a Series - Damages) and talented funnyman Seth Rogen (Pineapple Express) in the hilariously funny comedy, Bad Neighbours, about a young couple whose peaceful lives turn to chaos when a fraternity moves in next door.

When new parents Mac (Rogen) and Kelly (Byrne) discover that their new next-door neighbors are none other than a University fraternity club, led by charismatic president Teddy Sanders (Efron), they try to play along and make the best of an awkward situation. In an attempt to reclaim their youth, the couple accepts an invitation to one of the frats wild parties where they befriend Teddy and his right-hand man Pete (Franco) and establish an agreement to never call the police.

However, when the frat's parties grow increasingly more epic, and an -anonymous' police tip puts the boys in hot water, the trust between the two groups is broken and both sides of the property line begin to fend for their turf. As the neighbors' relentless battle and one-upmanship threaten to either get the college kids kicked off the block or make the newlyweds lose what's left of their sanity, thus begins an epic Greek war for the ages.

From Robert De Niro themed parties to outrageous pledging ceremonies and ridiculous airbag pranks, Bad Neighbours is a comical take on the very relatable topic of adults trying to hold on to their youth. Experience the excellent comedy stylings of pairing Rogen and Byrne, as they show how quickly things can go wrong when a family and a fraternity become neighbours.