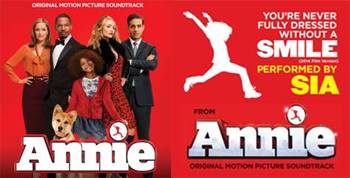 For generations, families everywhere have fallen in love with the musical score to Annie, and such iconic songs as -Tomorrow', -It's the Hard-Knock Life', and -Maybe', have provided the soundtrack to countless childhood memories.

Now, as a new vision for the classic show, Annie, is set to hit Australian cinemas on December 18 through Roadshow Films', Sony Music Entertainment Australia is pleased to announce that the Annie: Original Motion Picture Soundtrack will be released on November 21st, 2014.  The soundtrack features newly recorded versions of the film's signature songs plus new tunes performed by Sia, Jamie Foxx, Quvenzhané Wallis, Cameron Diaz, and more.

The first single lifted from the soundtrack is the 2014 film version of -You're Never Fully Dressed Without A Smile', performed and co-written by Sia and produced by Greg Kurstin, who also serves as Executive Music Producer on the film.  The single is currently available to purchase now HERE.

The Heartwarming heartwarming music video for the song can now be viewed on Vevo.com. Filmed with the energetic backdrop of New York City, the video was helmed by the acclaimed director Will Gluck, who is also the film's director.

Singer/songwriter Sia and producer/songwriter Greg Kurstin were charged with creating new arrangements for the classic songs, breathing new life into such iconic songs as -I Think I'm Gonna Like It Here (2014 Film Version)', -You're Never Fully Dressed Without A Smile (2014 Film Version)', and -Little Girls (2014 Film Version)',  They have also written new songs for the soundtrack, including -Opportunity', -Who Am I', and -Moonquake Lake' featuring Beck; Sia also co-wrote -The City's Yours' with Stargate.  Matt Sullivan served as the film's Executive Music Supervisor.

You're Never Fully Dressed Without A Smile (2014 Film Version) - Sia

The City's Yours - Jamie Foxx and Quvenzhané Wallis

Who Am I? - Jamie Foxx, Cameron Diaz and Quvenzhané Wallis

I Don't Need Anything But You (2014 Film Version) - Jamie Foxx, Quvenzhané Wallis and Rose Byrne

Opportunity (Sia Version) - Sia [Version does not appear in film]