Anchorman : The Legend Of Ron Burgundy 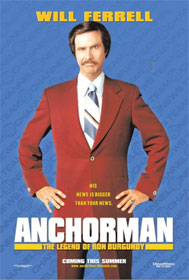 His News Is Bigger Than Your News.

Synopsis:
Will Ferrell ("Elf", "Old School") stars as Ron burgundy, the top-rated anchorman in San Diego in the 70's. When feminism marches into the newsroom in the form of ambitious newswoman Veronica Corningstone (Christina Applegate - TV's "Married With Children"), Ron is willing to play along at first -as long as Veronica stays in her place, covering cat fashion shows, cooking, and other "female" interests. But when Veronica refuses to settle for being eye candy and steps behind the news desk, it's more than a battle between two perfectly coiffed anchor-persons it's war.

My Verdict:
If you are unfamiliar with the work of Will Ferrell here is your chance to get acquainted and how. 'Anchorman: The Legend Of Ron Burgundy' is a continual feast of slapstick and satire with Ferrell taking the role of Ron Burgundy to the limit, time and time again. The sexist Burgundy believes his own publicity and it never occurs to him that he is at risk as an anchorman. He is the quintessential bachelor that dotes on his pet dog Baxter, even telling him "You're so wise. You're like a miniature Buddha, covered with hair". Some of the quotes that arise from the movie are truly memorable and were quite often ad-libbed. Sometimes there were up to 20 lines tried as the actors took on board the hilarity of the situation and they were given the freedom to explore their characters role, be sure to take time to see some of these when the credits play. This is certainly a time-warp zone setting for some as the 70's are relived to their fullest, every sexist line included. The hair, the moustache, the clothes, the sets are all pure 70's rehash as Burgundy and his crew ham every line to the extreme.

Christina Applegate plays a perfect pert Veronica Corningstone that it's hard to believe that she didn't grow up during this timeframe. She manages to come across as the blonde sex siren and so often you could just tell she was trying desperately to keep a straight face as those around her mocked her efforts. When she become co-anchor on the nightly news broadcast with Burgundy, they have these verbal sparring sessions after the broadcast has finished where the viewers can't hear what they are saying, yet you know they are talking to each other. These shots are priceless and include such classic putdowns including one where Ron tells Veronica, "I'm going to punch you in the ovary, right in the babymaker".

There are some great cameos in a fight scene in the back streets of San Diego where numerous tv network crews decide to fight out who is the better news team. Burgundy and his crew have been number one for so long that the others are sick of it and declare war and this fight ends up being very funny if not a bit silly. Special mention must also go the network chief played by Fred Willard who is a great comedic character actor who steals some of his scenes simply by being Fred.

'Anchorman: The Legend Of Ron Burgundy' is so uncannily true in its homage to the 70's that it is hysterical - especially if you lived it. It does seem as if it is one long comedy skit, which for the most part has comfortably been extended to fit a feature movie length. Essentially, this is Will Ferrell at his finest and funniest.