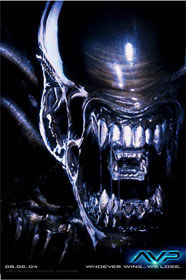 Whoever Wins, We Lose.

Synopsis:
The iconic monsters from two of the scariest film franchises ever battle each other on Earth in 'Alien Vs. Predator'. The discovery of an ancient pyramid buried under the Antarctic ice sends a team of scientists and adventurers to the frozen continent. There, they make an even more terrifying discovery: two alien races at war. No matter who wins, we lose.

What they witness 2000 feet below the frozen surface at first excites, and then terrifies them. They discover a pyramid bearing a mixture of Aztec, Egyptian and Cambodian cultures. Inside the pyramid they find a matrix of chambers so technologically advanced that it becomes obvious that an extraterrestrial influence has been at work there for thousands of years. The chamber walls reconfigure unexpectedly, trapping members of the team and cutting them off from their colleagues.

Moving from chamber to chamber, the horrific truth finally reveals itself: Predators have been keeping alive a captive Alien Queen who lays eggs at 100 year intervals. Young Predator warriors are tested by fighting the Alien offspring. The team stumbles into the middle of an incredible rite of passage - and a war between Aliens and Predators.

My Verdict:
'Alien Vs Predator' has been an anticipated movie for so long. Two of the most destructive, vicious evil alien characters created for the screen pitted against one another, a bit like waiting for 'Freddy v Jason'. The movie doesn't introduce either character for a while, slowly building the anticipation as the scientific party discovers an ancient pyramid beneath the Antarctic. This pyramid is interesting as the scientific party soon discover that it reconfigures itself every 10 minutes and reeks of 'Indiana Jones', which increases the level of expectation. Trouble is, the party is soon split into groups and then you know that one by one they are going to be killed off with no hope of saving each other. Enter the Alien and Predator to do just that.

After reducing the human numbers significantly, much of the action where the Predator takes on the Alien(s) is basically in the dark which allows for plenty of 'funny business' - who knows what's really happening, coupled with some very choppy editing making some of the battle scenes a total blur. And then before you know it, the movie is over! There is little human character development; unlike in either of the single franchises, so much of the movie seems pointless. But still, there might be enough to satisfy some fans of the genre but this will never be a great movie.

You know those movies where the best parts are often in the trailer? Count this as one of those. Unfortunately this movie could have been so much better if we weren't let in on some of the secrets in the trailer. A long build up at the start sets a snare for a finale that never really satisfies which was so disappointing. I just wished that these two protagonists had been left alone and their memories kept alive as individual anti-heroes.