A Table to End Hunger 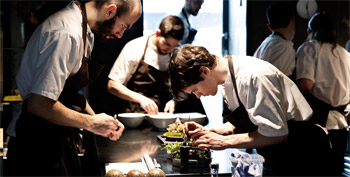 A Table to End Hunger

It can take weeks, if not months, to secure a table at some the country's most exclusive restaurants, but a new charitable initiative will allow Australian foodies to skip the queue with a conscience.

The Hunger Project Australia has partnered with the top restaurants, including the world's best restaurant NOMA, in a bid to end world hunger.

Launching in early February 2016, A Table to End Hunger will offer foodies the opportunity to bid on reservations at some of Australia's most exclusive and often fully booked restaurants, with all proceeds from the winning bids donated to The Hunger Project Australia. By bidding on hard-to-get tables via A Table to End Hunger's special eBay site, Australians secure an exclusive table for a great cause. A Table to End Hunger is a local Australian initiative that will support the global mission of the organisation – to end chronic, persistent hunger by 2030.

An -it' list of other high-profile restaurants are already on board, including NOMA, Aria, Bennelong, Quay and Guillaume, with more restaurants to be unveiled via the website www.atabletoendhunger.org.au.

The Hunger Project is a global, non‐profit organisation dedicated to ending world hunger by 2030 - not by handing out food, but by breaking the cycle of poverty. It sees people living in hunger not as the problem, but as the solution – their work is to empower women and men living in rural villages in India, Bangladesh and Africa to end their own hunger and lead a healthy, fulfilling life of self-reliance and dignity.

Cathy Burke, CEO, The Hunger Project Australia, said, 'Australia is a nation of foodies whose appetite for the greatest and latest in the dining-out scene is insatiable. That's why we're thrilled to partner with Australia's top restaurants to help us solve a first world problem for Australian foodies while also enabling us to solve a greater problem – chronic, persistent world hunger.

'At The Hunger Project, we've always believed the end of hunger is possible. Although this might seem like a lofty goal, in the past 25 years the number of people living in hunger has actually been cut in half! We have come a long way, but; there are still 795 million people living in chronic hunger globally. By unlocking their capacity, creativity and leadership, we can empower these people to transform their futures and end their own hunger," added Burke.

Funds raised from the eBay auctions will enable The Hunger Project to empower women and men living in rural India, Bangladesh and Africa to end their own hunger by unleashing their leadership, capacity and potential and providing training to develop their skills, knowledge and resources. This includes training on more effective farming techniques to grow more food, child and maternal health and nutrition so children can grow up strong and healthy, HIV AIDS education to stop the devastating spread of AIDS, literacy programs so people can learn to read and write, entrepreneurial skills so small businesses can expand and flourish, how to have a voice in the development of their communities and with their local governments, learning to demand better access to clean water and sanitation, and more.

Australians can participate in A Table to End Hunger by visiting www.atabletoendhunger.org.au to bid on a table at their selected restaurant for a proposed date and time. The lucky winner will get a VIP table at their selected restaurant. More details and the full terms and conditions can be found on www.atabletoendhunger.org.au. The campaign website will be live on 1st February 2016.

For more information about A Table to End Hunger, visit www.atabletoendhunger.org.au or for more details about The Hunger Project Australia, visit www.thp.org.au.