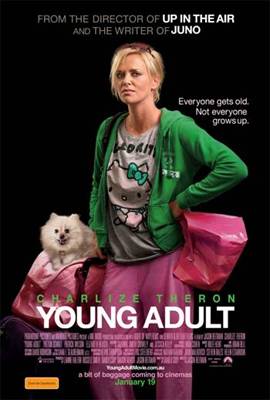 Verdict: Young Adult tells the story of a woman, in her late 30's, who is trying to finish writing her book and is finding it to be a real struggle. Needing to find reassurance she travels back to where she grew up to visit her old boyfriend...
Interestingly Young Adult doesn't have an incredibly likeable main character; I loved Mavis Gary as much as I hated her. However I was in stitches of laughter more than a couple of times, throughout this unique comedy.


About the Production
Production began in early October, 2010 at a soaring apartment building in Minneapolis, Minnesota. Production designer Kevin Thompson's creation of Mavis' condo in this high end structure provides the first inklings that her life is, well, a mess.

"The defining set at the beginning of the movie is her condo in Minneapolis. We wanted it to say a lot about who she was. Everything about it signaled that she lived like she was still in college. She didn't really clean up after herself and she didn't really have an aesthetic. She had a pretend adult relationship with this condo, like she thought she'd grown up and moved to the big city and but really she lived in a white box that was neglected. She had success as a writer so she sets up a big desk and is very proud of her little office area but even that sacred area of the apartment has begun to fall apart and decay," explains Kevin Thompson.

The production spent three days in Minnesota filming at Mavis' condo as well as a Denny's Classic Diner in Rodgers, MN, a downtown office building and on rural highways in Sherbourne County to capture the Minnesota landscape revealed as Mavis bolts from Minneapolis to her childhood home, the fictitious small town of Mercury, Minnesota. Before leaving The North Star State, costumer designer David C. Robinson purchased clothing for the actors and background extras from local stores to make sure the looks were as authentic as possible.

"I shipped back about 30 boxes of clothes from Thrift Town and these gigantic consignment shops that used to be supermarkets and are just enormous. These stores were full of cast offs from the people in Minneapolis. It's a lot of polar fleece, a lot of sweaters and turtle necks, high waisted jeans and relaxed fit chinos. These are the things that people really wear in the world, people who don't really give a hoot about fashion. So, I think it was important to make that contrast…that these are those people.

Clothing to these people is strictly for function and to keep comfortable and warm. Sure, they look in the mirror and they want to look good but not at the expense of comfort - very unlike Mavis." says David C. Robinson.

After wrapping in Minnesota, the cast and crew returned to New York and filmed on location in White Plains, Nanuet, New City, Tappan, Ardsley, Port Chester, Garden City and Massapequa Park before completing the last few days on a sound stage at JC Studios in Brooklyn, NY. The entire film was shot in an ambitious 30 days.

A visit to her childhoood bedroom, which her mother has kept eerily intact, reveals much about Mavis' past - and not just her rose-colored relationship to her bygone glory days, but indeed, her parents' ambiguity towards their daughter. The room is not quite a shrine to her but close.

"We wanted her bedroom to indicate that its former inhabitant had promise, and show a little bit of hope, but we also wanted it to still look a little sad. I think it's very important to have empty areas in the composition, so we dressed her room fully but then took things down off the bulletin board, and off the walls, so that there would be empty areas to feel like things were missing," explains Kevin Thompson. "Her room was straightened up and neat because her mother would keep it clean, but it was clear that nobody used the bed because there were things on it like storage bins," says Kevin Thompson.

For him and his team, the strategic set decoration offered a small but significant glimpse into a time in her life she is desperate to recapture. The ribbons and trophies are totems of the golden girl she once was.

In terms of the Matt Freehauf surroundings, their environment had to convey the siblings' stagnant and dismal lives.

"For Matt's house, where he lives with his sister Sandra, we made it look as if it could have been their parents' house, reflecting that they were both somewhat stuck in time. It would help explain why Sandra and Matt were still living together as brother and sister; that they might have just taken over the home after their parents died or left or went into a retirement home. The fact that to create the world of small town Minnesota Jason Reitman didn't want to do cute, picturesque, small town, homey, really hit a cord with me. I thought it was a really fresh way to go," says Kevin Thompson.

"The house was so depressing and it completely set the tone. I almost felt like it was a character in and of itself. It's like Sandra Freehauf, Matt Freehauf and the house," remarks Collette Wolfe.

The homes of the other characters not only described them but illustrated the contrast between Mavis and everyone else.

"We wanted this small town and these suburban areas where Matt and Buddy and Hedda live to have a real middle class, 60s and 70s look, with houses that were similar in style and indictaed that there were no big differences in income for the people in this particular community." explains Kevin Thompson.

"We also wanted to show Mavis' common ground with Matt-and that they were both people who existed in this state of arrested development, who live in chaos, who don't take any pride in what they have, and do. Buddy, on the other hand, was visually represented as having a very clean, if maybe bland house-and perhaps bland existence-but his house was much more together than Mavis's and Matt's, representing his more together life," adds Kevin Thompson.

Costume designer David C. Robinson used Mavis' wardrobe to effectively convey her state of mind, using the garb she chooses at various points almost as her armor in the battle to win back Buddy Slade.

Her first and recurring look is unkempt and disheveled, since she spends much of the film hung over and depressed.

"Jason Reitman was very clear on what she looked like for her wrecked look. He really guided that a lot because he wanted a particular twist on Charlize Theron. Obviously Charlize Theron is very beautiful, she's tall, she's slim and she's amazing looking so his concern was how to make her look wrecked. She's still the ex prom queen. She is a pretty girl but she's a pretty girl who when she's not trying, shows her age and shows her wear and tear and I think that was where he just needed to see it." David C. Robinson, knowing that Mavis is the kind girl who pays attention to celebrity and to pop culture, dressed her in things like Ugg boots and a Hello Kitty t-shirt demonstrating that even though she might look like a complete mess, she was still label conscious.

Jason Reitman believed that her clothing should reflect the disconnect between Mavis' public persona and her private self.

"We needed to establish a separation between how Mavis looked at home when nobody was watching vs. the character she created every time she went out. There was almost a sense that she was putting on different weaponry depending on her agenda," he says.

"Jason Reitman was the one who came up with the concept that she was a slob and that was really helpful for me. I came in wearing a pair of sweats during our second costume fitting. We were looking at photos of a series of possible costumes and I remember this vividly - there was a moment where Jason Rietman took a step back from looking at the photos and took a long beat, just staring at my sweatpants. He said something like, 'Hmmm, get those in a bigger size.' And that's pretty much what I wore throughout the movie. I would just roll them up and shove them in a corner in my car, drive up, put them on and we'd go straight to work," Charlize Theron recalls.

In addition to her "wrecked" look, Kevin Robinson took great pains to choose each outfit for her dates with Buddy - as, of course, Mavis does. In her very superficial Mavis way, she tries to be different people each time she sees Buddy, unsure about which "version" will win him over. In the process, her clothing also reveals how out of touch Mavis is with reality and the people who live in Mercury.

"The first meeting with Buddy is a hot date and she's wearing a little black dress that is completely incongruous for where she is. For the second date, it's funny because she calls it a rock concert when she's shopping for an outfit at the department store because that's how she's viewing this. The fact is that it's a night at a sports bar in rural Minnesota and she's seeing it as a night out with Mick Jagger." laughs David C Robinson. For this look, David C Robinson went all out. Mavis had a torn up black shirt, leather jacket and painted on jeans and looked clearly out of place among the flannel-wearing patrons.

Her third transformation occurs when she arrives for Beth and Buddy's baby naming party, where Mavis melts down, embarrassing herself and everyone there.

"The big question was what does she wear to the baby naming and my thought was well she's sort of tried hot date and she's tried cool rock girl and I think now she's saying, 'Maybe I need to work out the wife angle. Maybe that's what he's looking for' and of course her idea here is much more Westchester wife. I mean, what she comes up with is far more upscale and sort of refined than what a real Mercury, Minnesota wife would look like and so she of course doesn't fit in at all and looks completely out of her mind," says David C Robinson. It was this attention to detail that helped to demonstrate how delusional Mavis really is. "At one point I remember Charlize Theron had on the baby naming outfit and she turned to me and said 'This is my favorite costume for a character ever! This clearly gives me all the information I need about where this woman is and how truly lost she is that she would think this is something she should be wearing.' For everyone it kind of clicked and it gave Charlize Theron what she needed for that scene which was great," David C Robinson says.

In the same way a single dress can tell us everything we need to know about Mavis, a single tracking shot was all Jason Reitman and cinematographer Eric Steelberg needed to capture Mavis' epic meltdown.

"We followed her with a hand-held camera from inside the house to the outside. It was five straight minutes of unflinching acting and everyone in the crew was just sitting there with their hands over their faces. It didn't feel like we were making a movie at that point. It felt like we were in the audience, watching," says Jason Reitman.

That sequence illustrates, on many levels, the appeal of the movie as a whole to Jason Reitman. "'Young Adult' is honest. Ultimately, people don't change," he says.