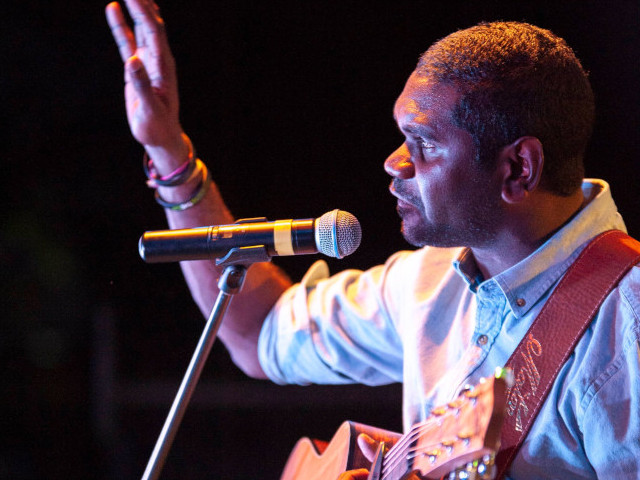 Yirrmal has just announced two new exciting singles releasing today titled "Get Happy" and "Dhaliwuy Bay," in the lead up to his highly anticipated album releasing later this year. Yirrmal is an singer-songwriter best known for his unapologetic and authentic means of personal storytelling, and we have been graced with two new singles to prove it.


Get Happy is a super fun, toe-tapping lighthearted ditty about being happy and carefree, putting a smile on people's faces with not a care in the world.  The tune is reminiscent and nostalgic of an uncomplicated, earlier time when things seemed simpler, people were content, and kids got dirty and climbed trees. We could all do with a bit of Get Happy in our lives considering what the Australian community has faced over the last few years!! #gethappy

Dhaliwuy Bay is expressive of the thoughts of Yirrmal's thoughts of his grandmother and grandfather, love and loss, and having space to acknowledge his inner feelings. An emotionally beautiful track, and a call to Yarmal's loved ones.

An extraordinarily passionate storyteller and incredibly gifted singer-songwriter, Yirrmal creates accessible, powerful and authentic new music of passion and truth, helping people to feel good, and to feel good about themselves. Hailing from the Rirratjingu clan group in the remote North East Arnhem Land community of Yirrkala, his works share his joy of creating, re-telling and performing stories as old as time with a fresh, inspired and contemporary reflection.

Secure and comfortable in his own identity and belief, Yirrmal charts his own journey, "I want people to forget about their troubles for a while, to live in the moment and just enjoy this music."

The Get Happy artwork cover showcases visuals of the keyboard and ivories, representing the musicality of the 50's and 60's swing era. The figure, coloured in red, gold, and black, is a subtle reminder of Aboriginal identity, as it dances and jumps across the keys in flight, representing Yirrmal's forward movement in his musical journey.

Additionally in Dhaliwuy Bay, the pandanus tree is symbolic to the Northern Territory top end bush, and the sunset at Dhaliwuy Bay is captured. The red throughout the artwork symbolises the red dirt and heat of North East Arnhem Land. Yirrmal addresses his attempts to keep the simple stylised artwork so the covers would complement each other side by side without overshadowing one another, whilst drawing the eye amongst thousands of competing images on the internet scroll.

Yirrmal's storytelling transcends time and space as his music expresses a powerfully instinctive and intuitive pledge that echoes and embraces buoyant courage and empathy, and he has plenty to say, sharpening his craft over the years from mentors such as Archie Roach, Shane Howard, Yothu Yindi, Neil Murray, and Andrew Farriss.

Yirrmal released his debut EP titled "Youngbood" (2016) receiving praise and coverage from outlets including Forte Magazine, (rating the EP 5/5) "His rich voice combined with his lyrics tells the stories of dreams, the issues in society and his culture – a unique insight." ABC Radio called the EP "deeply affecting and joyously celebrating his upbringing and place in the world."

Since then, Yirrmal has had great success within Triple J, featuring on his cousin Baker Boy's 2017 track "Marryuna" ranked number 17 in the Hottest 100 of 2017, winning Best Song at the Music Victoria Awards (2018) and Best Film Clip of the Year at the National Indigenous Music Awards (2018). Yirrmal's second featured collaboration with Baker Boy, "Ride", also featured in the Hottest 200 of 2021, with his third feature "Somewhere Deep" featuring also on Baker Boys 2021 debut album "Gela". Yirrmal co-wrote the three tracks with Baker Boy.

Yirrmals self-titled debut album is magnetic, a collection of works that is bold, celebratory and timeless, capturing thoughts and feelings of what it means to be alive in a beautiful and ancient landscape. The record, produced by Andrew Farriss (INXS) and recorded by Studios 301 at Andrew's Piedmont Studio, will be released later in 2022.