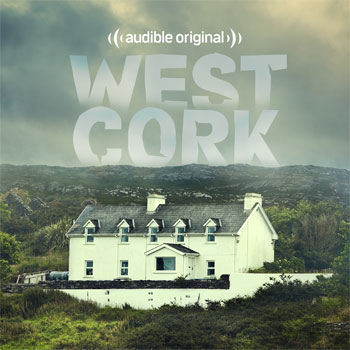 In 1996, a life ends and a mystery begins.
A young French film producer.
A brutal unsolved murder.
A cunning suspect, and an Irish town full of mystery and secrets.

Twenty years later, the case will not die.

Join the hunt for the truth… in a place on the edge of reality...

West Cork is Audible's first true crime drama. Based on the murder of Sophie Toscan du Plantier 20 years ago – this is investigative storytelling as an immersive audio experience. Time to get your binge on.

A new investigative audio series – based on a true crime, the murder of Sophie Toscan du Plantier 20 years ago – from former NPR producers and investigative journos, Jennifer Forde and Sam Bungey, this is investigative storytelling as an immersive audio experience.

The series examines the chilling murder of French film producer, Sophie du Plantier, who was mysteriously killed in her vacation home in West Cork, Ireland just a few days before Christmas in 1996. Sophie made plans to visit her vacation home alone, on whim, where her body was discovered at the foot of her driveway in a crime so gruesome and strange it captured the attention of the entire country.

The 13-part series transports listeners to West Cork, Ireland, a place of inescapable natural beauty that sits on the cusp of the Atlantic Ocean, where an unsolved murder still haunts the local villagers of Schull. West Cork examines the cold case that has fascinated the Irish public, unveiling the eerie and hidden secrets of this rural Irish town.

Listeners will hear first-hand interviews with prime suspect, Ian Bailey, who has been at the center of media attention for the past 20 years, along with many locals who knew and engaged with Sophie leading up to the night of the murder. The series takes an intimate look at Ian's life and the inner workings of his mind through additional interviews with friends, family and colleagues, leaving the listener questioning. 'Who is Ian Bailey really, and what actually brought him to West Cork?"

The hosts masterfully tackle these open-ended questions, gripping listeners from start to finish of each episode.

West Cork is the latest original series from Audible and reflects its global commitment to investing in bold and ground-breaking original content. In Australia, Audible.com.au has previously released Listen To Love, an original audio series exploring equal love and voiced by Aussie celebrities and everyday Australians.

Audible.com.au is owned and operated by Audible Ltd. Audible, the world's largest seller and producer of downloadable audiobooks and other spoken word content, invented and commercialized the first digital audio player in 1997, and has since been at the forefront of spoken word entertainment. In 2017, Audible.com.au customers downloaded an average of 17 audiobooks during the year, while Audible listeners globally downloaded almost 2.6 billion listening hours. Audible content includes more than 200,000 audio titles from leading publishers, broadcasters, entertainers, magazine and newspaper publishers, and business information providers.

Jennifer Forde is a documentary producer. She worked for many years at the BBC in London covering a range of programming, from human interest to social history. She went to university at Trinity College, Dublin. which is where she and Sam met.

Sam Bunge is a journalist. He's been an editor both online and in print, and written for many outlets, including The Guardian and This American Life. He went to university in Dublin where he met Jennifer, and started a mean-spirited monthly magazine, called Mongrel. Question: What inspired the idea of West Cork?

Jennifer Forde and Sam Bungey: We found a short article in the UK paper around the case, framing the story as a possible police corruption case. There was a long-running suspect and he was suing the state for wrongful arrest. We went to sit in on the trial and sat next to a retired lady who'd formed a club with friends to watch each day of the trial. Almost everyone had an opinion on this suspect. Then we went to West Cork and met the suspect who still lives near the scene of the crime. He's a curious guy in an extreme situation. Then West Cork itself became fascinating and mysterious … a place where so many lives had been thrown off course by this horrid event.


Question: Are you able to share with us, the process of creating West Cork?

Jennifer Forde and Sam Bungey: We spent three years creating this series, researching and taking the time to get to know many of the people close to the case in West Cork, and we went to Paris to meet Sophie's family members. And every person we met opened doors to more people who knew various aspects of the murder investigation. The series includes interviews from forensic scientists, pathologists and other experts who help disentangle some of the elements of the case.


Question: Can you tell us about why you chose to partner with Audible for West Cork?

Jennifer Forde and Sam Bungey: This story is deeply complex and we wanted to tell it right. We wanted to create a space where people felt comfortable to share their stories, and naturally open up without any intrusions. And Audible provided the best medium for this type of storytelling. The entire series launches on February 8th on audible.com.au/WestCork.


Question: What else are you currently listening to on Audible?