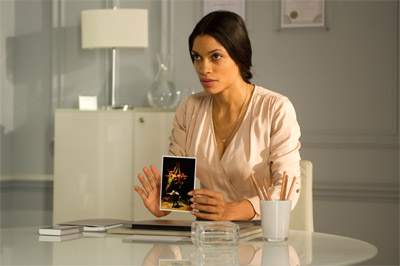 Synopsis: Simon (James McAvoy), a fine art auctioneer, teams up with a criminal gang to steal a work of art worth millions of dollars, but after suffering a blow to the head during the heist he wakes to discover that he has no memory of where he has hidden the painting. When physical threats and torture fail to produce answers, the gang's leader Franck (Vincent Cassel) hires hypnotherapist Elizabeth Lamb (Rosario Dawson) to delve into the darkest recesses of Simon's psyche. As she digs deeper into his broken subconscious, the stakes become much higher and the boundaries between desire, reality and hypnotic suggestion begin to blur and disappear.

"When you watch a great hypnotist at work, it's not fake, it's not slight of hand or tricks of light stage magicians," says director Danny Boyle. "You can see these people are not actors and they are not acting. If he's made them blind for a moment, they really are blind. And then he gives them their sight back. You think, "How does that work?" It's hugely entertaining. Because the mind is a really interesting thing for the film to explore, we wanted to do a little walk about around those ideas. There's all this stuff about consciousness and unconsciousness and what controls what. You think you're in control of everything. You think you're in control of what you're going to say, but you do not know what you're going to say next really."

Producer Christian Colson agrees: "What we were really interested in is how this world that we all move through with such certainty and confidence is really illusory in some sense; that our perceptions aren't as reliable as we would like them to be; that the distinctions that we comfortably make between reality and imagination are often false".

The production hired Professor David Oakley, a clinical psychologist and researcher at the University College London to act as a specialist hypnosis consultant and expert. He has also done research at the Institute of Psychiatry in Birmingham using MRI - Magnetic Resonance Imaging.

Professor Oakley began by taking the team through a brief history of hypnosis and the advances in this field to enable them to understand the real world limitations of the processes involved.

"From Mesmer to Elliotson, Charcot and others, we went through some of the phenomena they were looking at in the film, setting up cues, post-hypnotic suggestions, suggestions within hypnosis, journeys to find memories and how that might be carried out by a psychologist working with hypnosis," says Oakley. "I also talked about a study that we did, which parallels by chance one of the sets of scenes in the film, which is to do with hypnotically suggested pain, where Simon is subjected to hypnotic pain or suggested pain whenever he sees a particular image.

"We showed that if you gave a person a real painful stimulus and recorded their brain patterns, and if you then suggested that they were going to receive the same pain in hypnosis and recorded the brain patterns, the two were very similar. So it indicated that hypnosis generated real brain experiences and it was very plausible that Simon would be able to experience pain, as suggested, in a very real way."

To give more insight, Prof. Oakley explains the fundamentals of this area of medicine - "Hypnosis," he says, "is based on two things in practice - a hypnotic state, a trance like state, which is to do with focussing of attention, being absorbed in thoughts and ideas. It's an alert state. It's got nothing to do with sleep and it's not necessary to be relaxed. People sometimes confuse hypnosis and relaxation. There's no reason to be relaxed necessarily to be in hypnosis though you can produce very powerful relaxations in hypnosis. And the state is very much like a daydreaming state or the state you get into when you read a good book or watch a good film.

"From that point of view people who are accomplished at getting into parts, like actors empathising with the feelings of others, are partly using hypnotic types of strategies themselves to get into the characters' thoughts, ideas and feelings. And then on top of that absorbed focussed state, you have suggestion, which is the way you produce the phenomena of hypnosis.

"A fair chunk of the film is to do with searching for memory and the notion that you can, in hypnosis, represent a memory as a sort of package, which is to be searched for and opened in a safe way. So, Simon's use of the iPad for instance, which has the memory stored on it, is a way of making the memories more safe to access, because the person feels they are slightly distanced from them. That's a common strategy in hypnosis therapy."

Prof. Oakley explains that what hypnosis offers is the ability for the therapist to take the patient on an imaginary journey to seek out problem areas in their mental wellbeing.

"Sometimes people use so-called indirect methods in which there's no formal procedure but you simply talk to the person about interesting topics, about things they may have experienced, which are sort of trance-like in their own lives. You can engage them slowly like that.

"How one gives post hypnotic suggestion was one particular thing that's an important component in the story line. How you translate hypnotic experiences from individuals into groups, for instance, was another one. The people who use hypnosis therapeutically tend to be psychologists, counselling psychologists, clinical psychologists and so forth, who have been trained in the psychologies as their primary training, and then add hypnosis to the mix later. So it's a skill they add on to the repertoire of skills. And they're trained over a great many years".

Danny Boyle says: 'Our story is fictional but we wanted it to have a grounding in reality. While Elizabeth's methods are not always ethical they are nonetheless clinically possible. For the 5% of us who are highly suggestible - or 'virtuosos' as the experts say - that's quite scary!"