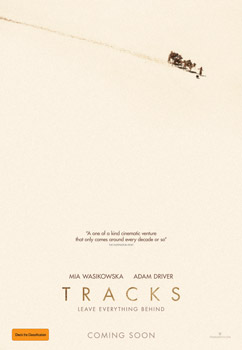 Synopsis: 'The aim of the Tracks' teaser campaign is to show the scope of the epic adventure Robyn Davidson undertook and to evoke the feeling of what it would be like to leave everything behind,' Transmission Films' joint managing directors Richard Payten and Andrew Mackie said.

-We believe a contemporary audience will relate to the desire of wanting to leave everything behind and disconnect as we find ourselves living in a time where we are more connected than ever.'

Based on Davidson's best-selling memoir of the same name Tracks tells the story of her solo trek from Alice Springs to the coast of West Australia in the 1970s.

Davidson's story captured the attention of the world and her book became a best-seller earning a place on the Australian school syllabus for many years following its release.

Made by the Academy Award winning producers of The King's Speech, Tracks stars Mia Wasikowska (Jane Eyre, Alice in Wonderland) and Adam Driver (Girls, Frances Ha). It is directed by John Curran (The Painted Veil, Praise).