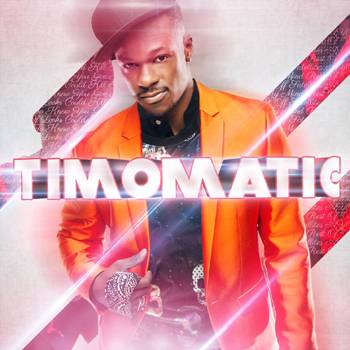 TIMOMATIC'S SELF TITLED DEBUT ALBUM TO BE RELEASED AUGUST 24

Sony Music Entertainment Australia is excited to announce that the highly anticipated first album from Timomatic will be released on Friday August 24. With three hit singles already under his belt, Timomatic is now taking it to the next level with the release of his debut self titled album, TIMOMATIC.

By all accounts it's been a remarkable year for 24-year old Tim Omaji, AKA Timomatic. After capturing the attention of Australian audiences as a finalist on Australia's Got Talent in 2011, the gifted singer and dancer instantly produced a massive hit single in the shape of the party-starter, "Set It Off" late last year.

His 3 x Platinum debut single climbed to the top of the ARIA charts, was the most played Australian track on radio in the first six months of 2012, and the video has received over 1.3million views on VEVO. "Set It Off" then went on to confirm a release in 23 countries worldwide, picked up 7 synch-deals in the US alone, and helped secure Timomatic a global publishing deal.

"The response to my singles has been extremely positive. I was thinking about it the other day, and the fact is that a lot of artists can spend many years trying to find themselves as an artist, and then they might sign to label who then take their time to work out where they fit. For me to come straight off the bat with a debut single that goes triple-platinum and sends me around the world is just amazing. There's just nothing more I can ask for - it's a dream come true."

In addition to the major success of his singles, Timomatic has also been around Australia supporting big name international acts such as Nicky Minaj, Salt'n'Pepa, Janet Jackson and Flo Rida, and later this month marks the beginning of his national tour support slot with Pitbull.

Whilst on the road with Ptibull, Timomatic will be stopping off at a number Westfield Shopping Centres to perform tracks from the album, meet his loyal and dedicated fans and do in-store signings presented by JB Hi-Fi and Sanity:

Impressively co-writing 90% of the album himself, Timomatic also worked with an array of local and international producers and songwriters (including DNA, Jay Sean, Michael Linney, and Lindsay Rimes) to generate a soulful blend of pop, dance and R&B, inspired by the likes of Usher, Justin Timberlake, Chris Brown, Ne-Yo and his childhood-hero Michael Jackson.

"I think that my music is definitely relevant to what's happening in music right now. I really want my music to capture as wide an audience as possible - I make my music for everyone. This music is pop music, make no mistakes about it."

TIMOMATIC THE ALBUM IS OUT AUGUST 24