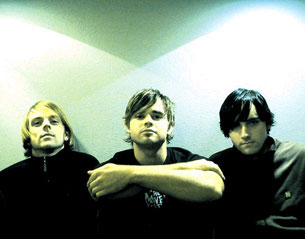 It's been over three years since rock group, Antiskeptic finished up after a ten year career that spanned a massive 1,000 shows worldwide. So it is with huge excitement that Antiskeptic announces their return!

Formed in the late 90's, Antiskeptic quickly rose to prominence through the strength of their energetic live shoes and acclaimed recorded material. Hard working and independent, the band self financed numerous EP's and albums, including the classics - Memoirs of a Common Man, Aurora and Monuments.

Brimming with an optimism so often missing from alternative music, Antiskeptic's unique blend of anthemic and melodic rock cemented their position as one of the country's finest live acts.

With new material, an expanded lineup and a newfound fire and passion burning brighter than ever, this is not just a reunion, Antiskeptic are back and set to wow Australians, once again!

Question: What inspired you to return the music industry?

Andrew Kitchen: It was a number of things that inspired our return; we did a reunion show in April 2011 for the closing of The Art House, there was a massive response and the gig actually sold out, six weeks out from the gig. It was a bittersweet gig because we were up on stage being able to play our songs and have fun again but at the same time it was for the closing of The Art House which was an important venue for the band, back in the day.

The response from people to us jumping back on stage again and getting out there was unreal! After the gig we chatted about the amazing ticket sales, new songs and how many gigs we could play each year; the long conversation process resulted in Nick and I being on the same page about what we wanted to do musically, whilst Sean Daly was keen to do a lot less and together we made the call to finish up with Sean, which was a shame. We have a couple of new guys on board now, which is amazing.


Question: What should audiences expect from your upcoming shows?

Andrew Kitchen: Firstly I am amazed that people are willing to give us the Saturday night spots in venues across Australia. I went to The Northcote Social Club the other night for a gig and I now know that our gig will have a great vibe in the room. Nick and I still have a real hunger for performing music, writing music and engaging people through music and that's what it really comes down to.

We are a four piece band; we have found a kindred spirit in, as you would, Tavis and Ryan the new bass player, guitarist and vocalist.

At our upcoming shows we will be playing three quarters of old material and a quarter of new material as well.

Andrew Kitchen: Yes! I have a faith, in Christ, and above and beyond that I have a massive heart for connecting with people through music because everybody has a story and I feel like my responsibility, being a song writer, is to explore other people's stories. Quite a lot of the songs I have written are in a narrative voice and lyrical style, most are testimonial about my experiences of life and living. One of the main criticisms that Christians have experienced in the past is the disconnect with their society and culture due to a subculture which has little to no connection with other people who are not involved in Church life and I like to think that in some ways we can help break that down and say 'yes we are Christians, we are people of faith, but we are also just blokes who have wives, kids, girlfriends and jobs in the real world - we have struggles and want to be honest by laying our stories out in the real world, on stage and off stage. We want people to realise that we don't have it on easy street, because of what we believe". The most important thing for me is to be honest about our stories of struggles and share from our heart without judgmental content; being on stage and singing with other people is the most important thing, for me.

Andrew Kitchen: The Butterfly Boucher gig at the Northcote Social Club the other night was a lot of fun and her style is alternative, indie-pop! I listen to a fair bit of rock; I listen to all sorts of styles of music including indie and alternative; I also listen to everything from Ben Fold to Dave Mathews Band through to Counting Crows and Crowded House. Nick and I are massive fans of The Police. One of my favourite Melbourne songwriters is John Flanagan who is a brilliant lyrist and I think his songs are absolutely wonderful!

I have a huge amount of influences and that is one thing that I talk to people about with my work at The Push (the youth music organisation); I tell them that they really need to listen to music broadly, there is something about every genre of music that is magical and there is something to be learned from every style of music. I can hear the influences in my music, I will be listening to one of our songs and know that the big chorus melody is because I was listening to a Counting Crows melody or the second guitar part was inspired by an Ben Fold or Ben Harper song.

There are so many different influences from different areas and I think that a lot of young people, who are songwriters and performers, get into the habit of listing to one style of music and then expecting themselves to be inventive, creative and bring something new to the table - when they aren't feeding their mind new ideas to dissect and rebuild. A great example is House vs Hurricane, particularly with their first EP; when they would burst into a techno breakdown halfway through a hardcore song and it would really work, it was totally amazing! House vs Hurricane has a lot of cred and people interested in what they do because of their amazing blend of music that they create with a tight rhythm section.

I really enjoy both of those elements (performing live and recording) of being in an original band, equally. I enjoy song developing in my studio at my house - I spend what time I have (with three kids and all) in my studio, because I really enjoy working on new songs in the privacy of my own studio.


Question: What is the story behind the bands name?

Andrew Kitchen: Many years ago now I got my left ear, quite high up, pierced and it got infected because I got kicked in the head at a mosh pit during The Foo Fighters and my ear swelled up and I had to get antiseptic, it hurt and I couldn't sleep on my left side. I had the little bottle of antiseptic in the cupboard in my bathroom and I opened the cupboard, looking for something else and I saw the bottle and thought it read 'Antiskeptic' and I thought that was a cool band name. I spoke to several mates who were forming bands or were in bands and said 'I've got your band name' and they said 'Dude, that is lame, there is no way we are using that name'! I ran the name by Nick and he said 'That's sweet man' and it stuck, way back in the day.

When we were kicking on, way back in the day, there was the temptation to go with a three word band name (One Dollar Short, For Amusement Only ect), we went with Antiskeptic and I remember thinking 'I don't think it locks us into this genre or era of bands, it gives us more room to move' and history has proven that, that has been the case and we have been able to change our style and not worry that we have a punk-rock sounding name.