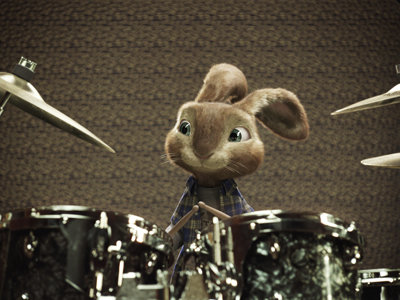 Synopsis: Blending state of the art animation with live action, Hop is a comedy about E.B. (voiced by Russell Brand), the teenage son of the Easter Bunny.

On the eve of taking over the family business, E.B. leaves for Hollywood in pursuit of his dream of becoming a drummer. He encounters Fred (James Marsden), an out-of-work slacker with his own lofty goals, who accidentally hits E.B. with his car.

Feigning injury, E.B. manipulates Fred into providing him shelter, and Fred finds himself with the world's worst houseguest.


Blocking and Animation
While animation has multiple pre-visualisation steps, in a film that is a hybrid of animation and live action, post-visualisation (also called "blocking") is much more common. Beginning with a plate that has an actor interacting with "Beanbag E.B.," R&H would take E.B. in the scene (e.g., one in which he is resting in Sam's hands) and roughly block the different phases that E.B. would go through in the sequence. Each shot received a blocking pass so that Hill could tell where E.B. would be at every point.

Once the blocking was signed off, the animation team created a rough pass of the general facial expressions and movements that E.B. would have with the performer. Usually, the animator working on the scene would create thumbnail sketches of what he or she wanted E.B. to look like as the rabbit moved. This gave the rough flow of E.B.'s "performance" throughout the scene.

Taking the digital double of the performer who interacted with E.B., the animators in charge of this sequence would then move that "actor's" hands to pick up, put down, push or pull E.B. This allowed a reference for the next step of fitting E.B.'s personality-from eye rolls to squints and other affectations-into the scene, as well as making his movements flush with the real-life human with whom he was interacting.

Whenever E.B. moved alongside another actor, multiple challenges would arise. The animators had to make sure that E.B.'s checked shirt flowed naturally when he brushed by Fred or that his fur was fluffing or squishing naturally as he was held by Sam. For example, in the scene in which Sam picks up E.B.-believing he is simply a child's stuffed animal-she rests him on her shoulder, strokes his fur and touches his back and tail. The R&H team digitally constructed this fur and cloth interaction so it appeared to be seamless in the final product.

In the ever-evolving world of comedy, the final sequences the animators delivered were often quite different than those initially storyboarded. Shares Chris Bailey: "When you cut a movie together, you find surprises that come up, such as this scene is more dramatic than we thought or that scene is funnier than we imagined. After the scene was cut together, we all talked about what we wanted out of E.B.'s performance…what we wanted him to communicate to the audience. We took that information, and I did a handoff to the animators at R&H so they could very forensically go through every shot."

When the entire team was comfortable that what they wanted to have communicated was accomplished, then the final animation occurred. At this stage, R&H tweaked E.B.'s fingers and the suppleness of the face. After that was approved, they then moved on to hair and lighting. 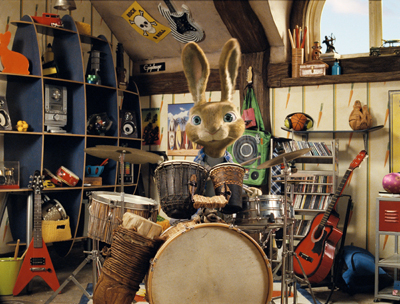 While the humor begins with the screenplay, many of the best gags in animated films come from the animators. It was crucial to Tim Hill, Chris Meledandri and Imperato Stabile that the artists not feel it was their job simply to execute the shot, move the character through its marks and hit the paces. They were always asked to perform the character. Whenever a shot came back that the team wasn't 100 percent comfortable with, they'd collectively ask: "What else can we have E.B. do here?" or "Is there a funnier way that he can react to Fred?"

Compliments Chris Bailey of his fellow artists: "These people are performers. I like to keep the emphasis on the individuals behind creating the characters, because they're the ones that make the characters funny. It's the artist who is rendering the hair and rendering the lighting and the environment that makes it believable."

Lighting Hop
When it came time to lighting the scenes with E.B. on set, a curious chrome ball was used. Explains senior animation supervisor Andy Arnett of its use: "This was for lighting reference, so when the lighters were ready to put the CG lights into our scenes to light E.B. and make it look like he was part of the set that was being filmed, they looked at the reflections that showed up in the photographs of that chrome sphere. It showed where all the different light sources were placed, as well as the colors and textures of all the different pieces in the room that would reflect light off of E.B. That way they were able to make the lighting that hit our CG character match exactly with the lighting that was on set at the time. When you put those two pieces togethe

r, it looks like he was in the room along with the actors and everything else in the scene."

After Tim Hill and DP Collister shot key scenes, R&H put a camera in the middle of the set, took a 360-degree picture of the entire environment and mapped the inside of it. Discusses Chris Bailey: "I like to think of it as a big ball surrounding the set, because when you light actors or a set, they're not just being lit by the lights on the set. They're actually being lit by the reflections of everything that's on the other side of those lights-the ceiling and the crew standing around."

"We took a high-dynamic range imagery image of the lighting setup," Rodahl elaborates. "This calculated the lowest and the darkest lights in the room. It was a camera rig set up to provide a 360-degree, fish-eye lens of the environment. Then we used that inside of the computer to map out what the strongest lights and their positions are, so that you see the same lighting influences on E.B. as you see on Fred. All that helped to make E.B. fit perfectly into the scene."

Rocking Out on Hop: Music of the Film
The production team, under the direction of composer Christopher Lennertz and music supervisor Julianne Jordan, set out to create a musical experience for Hop that was young and fun and encompassed the energy and excitement of the comedy. Both musical talents were previous Tim Hill collaborators on Alvin and the Chipmunks, and Julianne Jordan helped to create the popular soundtrack for that film, which featured the signature "chipmunk" sound.

For Hop, the filmmakers recruited the Australian-born pop/R&B artist Cody Simpson to cover an updated version of "I Want Candy." The drum-centric pop song ties into E.B.'s world and into key sequences and themes of the movie (e.g., Easter candy).

Though The Strangeloves originally recorded the song in 1965, most audiences are familiar with pop group Bow Wow Wow's 1982 cover, which became an irrepressible song that year. The filmmakers were pleased to have the 14-year-old Cody Simpson, whose solo debut, "iYiYi (featuring Flo Rida)," join the project. Says Tim Hill of their logic: "Of course we wanted him. Who wouldn't? Cody Simpson is fantastic. He has a real sense of how to be pop but not derivative, and his voice…well, it has a lot of emotion, but it's still got a nice edge, and he's able to work both sides of that." 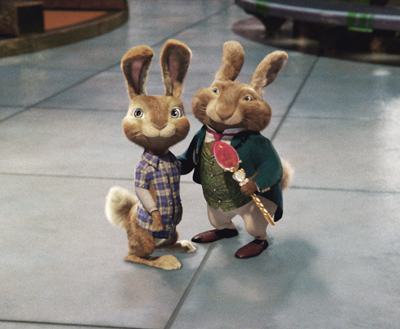 Additional key songs blend old school with modern music. They represent an interesting mix that includes "Dynamite," R&B singer Taio Cruz's hit that peaked at No. 2 on the Billboard Hot 100 chart in 2010 and has sold more than four million digital copies in the U.S.; "We No Speak Americano" by Yolanda Be Cool & Dcup, which samples the 1956 song "Tu vuĂ˛ fĂ  l'americano" by Italian singer Renato Carosone and became a top-40 hit in the U.S. in 2011; "Every Rose Has its Thorn," the power ballad by metal hair band Poison, which was released in 1988 and was the band's first No. 1 hit in the U.S.; "Celebrity Skin," the 1998 debut single from the group Hole's third album, which reached No. 1 on the Modern Rock Tracks chart; and "Mr. Big Stuff" by Nikki & Rich, which is the hip-hop/R&B duo's cover of Jean Knight's 1971 hit song.

Tim Hill notes that he wanted the music to evolve over the course of the movie as we move through Fred and E.B.'s journey. He states: "We start with some very percussive-based, drum-circle-like drumming and then fold that into more pop stuff as the movie progresses. Then, naturally, we wanted to get some songs that were fun and topical. The audience will also hear some percussive elements in the score that support E.B.'s desire to be a drummer."

Making a cameo in the comedy are The Blind Boys of Alabama, the legendary musical icons whose founding members began singing together in 1939 when they met at an Alabama school for the blind. These musical pioneers have been celebrated by the National Endowment for the Arts with lifetime achievement awards and inducted into the Gospel Music Hall of Fame. The Boys record a song in Hop at 2UP Games for the upcoming fictional game "Extreme Blues Master."

Chris Meledandri explains how they came aboard the production: "The Blind Boys idea came from writer Brian Lynch. The idea that in the future 'Rock Band' will spawn new music-based games like 'Extreme Blues Master' is a wonderfully silly notion, and who better to be a key part of that than The Blind Boys!"

In the scene, E.B. sneaks into their session and jams on the drums with them. Says Tim Hill: "The Blind Boys are rooted in gospel and blues, which is very basic to American music. For the story, it helped that they couldn't see that E.B. was a rabbit and he was 'filling in' while their drummer was on a break." 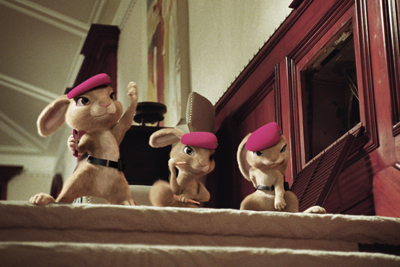 Throughout the film, there are multiple scenes in which music takes center stage. These include Alex's Easter play, in which E.B. and Fred steal the show and get the crowd to sing along to "I Want Candy," as well as E.B.'s audition for Hoff Knows Talent.

Having previously directed singing and dancing chipmunks, Tim Hill found these scenes more familiar than most filmmakers would. "The music scenes with E.B. drumming were actually really fun to shoot," he says. "The only trick was to imagine that, although you're only photographing an empty drum set, eventually there would be a CG bunny banging away on those drums.

"It's important because you have to figure out how close to get, what parts of the kit he's hitting and how the grammar of music videos translates in this case," he continues. "The drumming scenes were pretty similar to the Alvin musical scenes in that you aren't filming anything real; you're filming background plates, and the character is inserted later. Though there was one scene in Alvin, the 'Witch Doctor' song, that was very challenging because of the choreography: I had chipmunks moving around all over the place. Here, a drum kit was stationary…"