The Night We Called It A Day 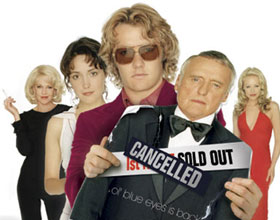 Thanks to Universal music's release of soundtrack 'The Night We Called it a Day' here is your chance to win. Enter now!

This Nobody Is About To Catch A Somebody

Synopsis:
Rod Blue, a down-on-his-luck Aussie rock promoter, struggles to find the one act that will turn his life and business around. Just as a relationship starts to bloom with his assistant Audrey, Rod secures the coup of his career; bringing the legendary Frank Sinatra to tour Australia. THE NIGHT WE CALLED IT A DAY is a comedy about what went down when ol' blue eyes came to town.


My Verdict:
What a fun trip down memory lane is The Night We Called It A Day. It is Sydney, Australia in 1974 and Rod Blue (Joel Edgerton in excellent form) is a hopeless promoter who needs a break. He decides to go for it and chases Frank Sinatra and much to his amazement, secures him for a visit to Australia. However, Rod doesn't know what he has let himself and indeed the people of Australia.

Upon his arrival in Australia, Frank Sinatra (the fabulous Dennis Hopper) did not endear himself to the press and came across as an arrogant Yank. He criticised the press and in particular calling one (Portia De Rossi) a "two dollar whore". Calls were made for him to immediately apologise and when he refused, all the trade unions black banned him, leaving him stranded in his hotel room. The ban was led by the then President of the ACTU, Bob Hawke (David Field having a field day!).

What ensued is fun and it's great to be along for the ride. Frank Sinatra is portrayed as cold and hard yet having enough soft moments that you can't help but like him just a bit. His tender side is brought out by his future wife who came with him on the tour, Barbara Marx (Melanie Griffith). All the songs that are performed by Sinatra in the movie are Tom Burlinson whose voice is so perfect and gutsy that it's hard to believe it really isn't Sinatra.

The Night We Called It A Day is loosely based on the events and is by no means meant to be a comprehensive account. It is nostalgic and will appeal to wide audience, some for the memories, others for a history lesson. It is well worth the trip.