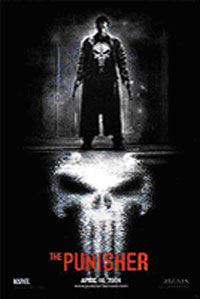 Synopsis:
Frank Castle (Thomas Jane) is a man who has seen too much death in his life, first as a Delta Force Op and later as an FBI special agent. He has managed to beat considerable odds, and is finally moving out of the field and into a normal life with his wife and son. On his final assignment, Castle plays his undercover role perfectly, but the operation spins out of control. This places the FBI on the wrong side of Tampa businessman Howard Saint (John Travolta) and his glamorous wife Livia. Notwithstanding their glossy social profile, the Saints are no genteel Florida couple; behind their copious wealth are violent beginnings, underworld ties - and a chilling capacity for brutality. Castle's worst nightmare is about to come true, as Howard Saint and his lieutenants unleash hell at the Castle family reunion. But Castle, to his everlasting torment, survives.

Drawing upon all he has learned in 20 years, Castle sets in motion a brilliant plan to punish the murderers. He takes up residence among in a dilapidated tenement building on Tampa's industrial waterfront, where his fellow tenants include Joan (Rebecca Romijn-Stamos), a waitress at a nearby diner who is trying to put her life back on track. Castle's neighbours become his last link to the idea of human community and warmth. It is this makeshift family - forgotten men and women with no one to protect them - who enable Castle to find the one thing he least expects: redemption.

My Verdict:
It is hard to know how to class 'The Punisher'. On one hand this movie is really abysmal yet it is also actually quite good, believe it or not. It is so full of corny quotes that it was fun waiting for the next one after you realise that this is a movie full of them. For example, in voiceover by Frank Castle, "Those who do evil to others will come to know me well", as well as another fine one when he is talking to Joan, his neighbour, as she is trying to convince him that you can have good memories, "I'm not what your lookin' for". Most of the quotes are said in a deadpan manner that makes them even funnier than they actually are, which is as they are in the comic books from which this movie is based on.

Thomas Jane is a very brooding, muscly Punisher, who is perfect for the role. How he recovers from so many violent attacks is astonishing, as is his determination to punish Howard Saint played slickly by John Travolta. The highlight of the movie is the three neighbours that Frank has in his rundown apartment. They are the social misfits of which he is now one and they realise that they are a family of a different type.

'The Punisher' is a very violent movie, which makes it definitely a film for older viewers. Some of the killings are quite brutal and bloody. The final scene involves blowing up many cars which, when seen from the air, form the image of The Punisher as he has come to adopt, the skull. This is worth seeing alone for pure corn. Don't see this film if you are after serious drama as you will be disappointed. Just see it for an alternative take on revenge and punishment.